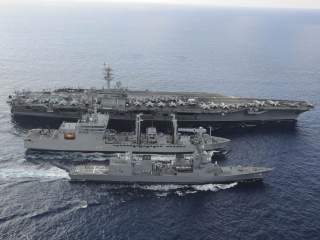 Back in mid-February, we were in India for the 2016 Quad Plus Dialogue as guests of the Vivekananda International Foundation. This was the third event in a series that kicked off in Canberra in 2013. The Quadrilateral Security Dialogue partners are Australia, India, Japan and the United States, and we also had representatives at this meeting from ‘Plus’ countries—in this case Indonesia, Malaysia and Sri Lanka. Talks were held at the ‘second track’ level (i.e. academics and think tanks rather than government officials).

The idea of the Quad has been around for a decade, but hasn’t been taken up at government level, despite occasional spikes of interest. There’s little doubt that Beijing wouldn’t be thrilled that these talks are happening—it has tended to see the Quad as a conspiracy against its interests. And China would doubtless take an even sourer view of the inclusion of a widening range of states.

But to no small extent, the Quad Plus is a collaboration of China’s own making. To be sure, the Quad countries have a broad alignment of interests and share democratic ideals, but that doesn’t make for a great agenda for a roomful of security wonks. It’d be hard to see how a Quad Plus meeting could be sustained if all was well in our world. This year’s Quad Plus came at a time when events in the South China Sea provided an increasingly tense backdrop and it shouldn’t surprise anyone that much of the discussion was about responses to Chinese assertiveness.

The ensuing conversations showed, we think, both the strength and weakness of the Quad formulation. The strength is that four quite diverse countries can sit around a table and have a pretty candid discussion of their security concerns and possible actions. The weakness is that those security concerns don’t overlap quite as strongly as a first glance might suggest—especially when it comes to the nitty-gritty of what we’re willing to risk over particular issues. When it comes down to it, Australia, Japan and the United States have a shared maritime security concern in the western Pacific, while India’s primary concern is on their extensive land border with China.

Actually, it’s not quite as clear-cut as that; India also has maritime interests, sees itself as a growing naval power and has participated in naval exercises with the other Quad members. And India is closely watching China’s naval activities in the Indian Ocean. But ultimately, it’s hard to see India risking blood and treasure for the sake of freedom of navigation in waters far to its east—especially when that would likely raise the stakes on its northern border. Similarly, it’s hard to see Australia, Japan or the United States being enthused about a high altitude land war on the disputed and complex China–India border.

The net result is that, at least as things stand, it’s hard to see the Quad producing a coherent response to hard security issues. Each country will make its own judgment about how much it’s willing to put on the line over any given issue, and about which issue is paramount. Even among Australia, Japan and the United States, the respective strengths of our interests in both the East and South China seas varies greatly. Adding ‘Plus’ countries to the mix only makes it harder still, as the cost-benefit calculus for militarily weaker nations is necessarily different again.

That’s not to say that the Quad Plus Dialogue isn’t useful, and it shouldn’t be supposed that it was all about China. Transnational problems like terrorism, cybercrime and piracy are well worth talking about, and there was a fruitful dialogue on those topics. There’s always going to be benefit from similarly disposed members of the international community talking straight about tough issues.

It remains to be seen whether the four Quad countries will ever convene regularly at an official level to caucus on security matters. It’s been almost a decade since the informal “exploratory meeting” of officials from the four countries at the sidelines of the ASEAN Regional Forum in Manila drew Beijing’s ire in 2007. In the absence of a catalyst, the four countries will probably remain content to liaise through their existing bilateral and trilateral channels. As with so much else about the regional response to China’s rise, the fear of falling into a security dilemma dampens the prospects. If there’s to be a catalyst, it will almost surely originate from China.

In the meantime, one way to engender cooperation would be set aside the Quad as a diplomatic initiative and instead work on expanding the existing tripartite (India–Japan–United States) Malabar naval exercise to include Australia as a fourth permanent partner. To date Australia has only participated once, back in 2007. When all’s said and done, naval cooperation wouldn’t just be valuable in and of itself, but it would also send almost as strong a message of common purpose as any communiqué from a diplomatic meeting.

Mark Thomson is senior analyst for defense economics at ASPI.

This article first appeared in the Strategist.