Can America, Japan and Australia Combined Stop China in the South China Sea? 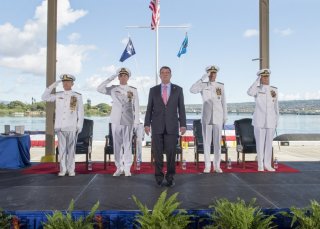 The Asian security dialogue is about verbal jabs and thought balloons. And policy signaling and point scoring. And, ideally, some meeting of minds, reaching towards actual agreement.

The Shangri-La Dialogue in Singapore, the 14th Asia Security Summit, had plenty of the usual show and shove.

Compared to the last couple of years, though, the verbal biffo from the Chinese delegation was dialed down a few notches. Having been busy creating new geographic features in the South China Sea, terraforming with mountains of sand, the Chinese at Shangri-La seemed keen to judge the effect of their recent show, rather than do much shoving.

What response would they get to their fast build towards a fait accompli? The leader of the Chinese delegation was a Navy man, so they came prepared. The relative calm of China’s pushback suggested a certain comfort with the jabs they got.

The shoving from the ASEAN side was as vigorous as you’re likely to get from ASEAN, especially the strictures delivered by Malaysia and Singapore. Australia joined the fray via the speech by Defense Minister, Kevin Andrews, in private bilaterals and in the trilateral with Japan and the US.

Australia has sent its Defense Minister to every Shangri-La Dialogue since its inception in 2001—a record matched only by Japan and the host, Singapore.

The routine is well established. What has come on strongly in the last few years is the annual sidelines trilateral between the US Defense Secretary and the Defense Ministers of Australia and Japan.

The US Defence Secretary Ashton Carter said that “America’s trilateral networks are blossoming.” And the first blossom he listed was the trilateral with Japan and Australia.

From the moment it took office, the Abbott Government has inserted more iron in the idiom in talking about China’s territorial ambitions, certainly when compared to the cautious restraint of the previous Labor Government. The trilateral process—both Foreign and Defense Minister versions—has been a key venue for developing that idiom.

Australia’s rhetoric has shifted beyond promoting freedom of navigation and secure sea lanes to specific warnings to China about altering the status quo.

The trilateral poking of China is done by the Foreign and Defense Ministers. The U.S. President and the Prime Ministers of Japan and Australia get to take the trilateral high road.

At their trilateral in Brisbane during November 2014, Obama, Abe and Abbott “reaffirmed the global reach of their cooperation and the value of comprehensive US engagement in the Asia-Pacific region.” Not a trace of China baiting to be seen. That’s a job for Defense Ministers.

The weekend statement in Singapore on the fifth trilateral meeting of the Defense Ministers of the US, Japan and Australia lined up against China with communiqué language of strong opposition and serious concern.

The U.S., Japan and Australia underscored their shared interests (peace, stability, respect for international law, freedom of navigation and over flight) and “unimpeded commerce in the East China and South China Seas.”

The ministers then made the trilateral jab at China:

“They expressed strong opposition to the use of coercion or force to alter the status quo in the East China and South China Seas unilaterally and their serious concern over Chinese land reclamation activities in the South China Sea.”

This second half of that sentence is an add-on, one step up the scale, from the trilateral communiqué the US, Japan and Australia produced at last year’s Shangri-La meeting, when the Defense Ministers:

“expressed their strong opposition to the use of coercion or force to unilaterally alter the status quo in the East China and South China Seas.”

So this year it isn’t just an admonition directed at “claimants” but specifically to China.

The trilateral process can go only so far in coordinating process and language. Carter’s announcement in his speech was a new Southeast Asia Maritime Security Initiative, to spend up to $425 million on building maritime capacity in the region.

The speech after Carter was made by Japan’s Defense Minister, Gen Nakatani, who had his own announcement.

Nakatani proposed what he called a Shangri-La Dialogue Initiative to enhance maritime and aerial security.

The U.S. thought balloon bumped into the Japanese thought balloon. Such are the problems of signaling and scoring and seeking agreement at Shangri-La.