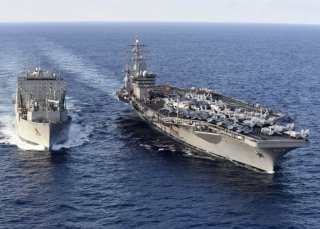 Over the past several years, America’s traditional allies have begun to worry that this nation is no longer a reliable security partner. Many of the reasons for friends and allies to doubt U.S. commitment, resolve and even vision can be laid at the feet of the Obama Administration. But comments by some presidential candidates on the need to further reduce defense spending or to require that allies pay for the security provided by U.S. forces suggests to foreign observers that the alienation of the American polity from its post-World War Two role as the maintainer of a stable international order is widespread.

But there are also hard facts that would cause any reasonable observer to question the future role of the U.S. in the world and, hence, its ability to maintain the so-called Pax Americana. There is the unwillingness of both political parties to put this country’s fiscal house in order. The likelihood of trillion dollar budget deficits as far as the eye can see, coupled to an ever-growing number of entitlements and the eventual rise in interest rates on government debt must eventually, and probably in the relative near-term, create a crisis between domestic and defense expenditures. Our European allies faced this problem and their solution for nearly two decades has been to drastically cut defense spending. The only attempt at a bipartisan answer to growing federal budget deficits came in the form of the 2013 Budget Control Act which sliced nearly one trillion dollars from projected defense budgets over ten years.

There is also the reality of the amazing shrinking U.S. military. Our friends and allies have eyes; they can count. They realize that an Army of 450,000 active soldiers, a Navy of less than 300 ships and an Air Force smaller than at any time since the start of World War Two cannot keep all of its commitments across multiple continents simultaneously. Senior defense officials appear to be falling all over each other in their enthusiastic efforts to point out that the U.S. military is losing its technological edge. The ultimate guarantor of this nation’s security and that of allies in Europe and the Pacific, the nuclear umbrella, has been allowed to atrophy even as every one of this country’s potential adversaries is engaged in major nuclear modernization programs.

Yet, compared to all the other options available to America’s allies for ensuring their security, this country is by far the best choice. This is particularly the case for the world’s democracies. Even when the Western democracies seek to come together to create strength through unity, it is the presence of the United States that provides the steely backbone and connective tissues to support and animate an effective security organization. Just compare NATO to the European Union.

The U.S. military today maintains unparalleled capabilities to dominate warfare across the conflict spectrum.  No friendly or allied navy, not even the collective assets of all their fleets, equals the U.S. Navy’s array of nuclear-powered aircraft carriers, amphibious warfare vessels, attack submarines and missile destroyers, not only in numbers but in the capability of the individual ship or boat. Other countries maintain a regiment or brigade of naval infantry. Only the United States maintains a Marine Corps of 172,000 and the ships and equipment to deliver two combat-ready brigades across a hostile beach or deploy multiple Marine expeditionary units and amphibious readiness groups simultaneously. There are no alternatives to the advanced capabilities provided by Navy/Marine Corps aviation assets such as the F/A-18 E/F, the EA-18 Growler, the E-2D Hawkeye and the V-22 Osprey. Similarly, the U.S. Air Force alone possesses the fleets of long-range bombers, aerial refueling tankers, transport aircraft and unmanned aerial systems to project power half a world away.  The Air Force’s array of fighters, including the only deployed fifth-generation air superiority aircraft, the F-22, continues to allow an unparalleled degree of superiority in the air.  The U.S. Army is unique among its brethren not only in the number of combat brigades it can deploy, but in the breadth of its combat support and combat service support capabilities. Only the U.S. military has the organization, processes and battle management/commander and control systems to successfully coordinate joint and coalition operations across an entire theater.

When it comes to modernizing its military, for all its problems, the United States is positioned to still maintain a dominant position in many, even most, warfare domains. For example, there is no Western equivalent to the F-35 Joint Strike Fighter, which is why eight allied nations signed up for the consortium to develop and acquire it and other nations are clamoring to buy some. The Ford-class nuclear-powered aircraft carrier and the newest variant of the Virginia-class attack submarine with its enhanced payload module will provide the U.S. Navy with unparalleled capabilities for sea control and power projection on land. Investments in directed energy weapons, new precision guided munitions, hypersonics, unmanned air, land and sea systems, cyber and ISR hold the potential to radically enhance U.S. military capabilities in virtually all domains.

This country’s friends and allies have good reason to worry about America’s politics and its commitment to maintaining a stable international order. At the same time, they have every good reason, both political and military, to continue to seek shelter beneath the somewhat tattered American security umbrella.