Can America's Navy Save the U.S. Army's Helicopter Fleet? 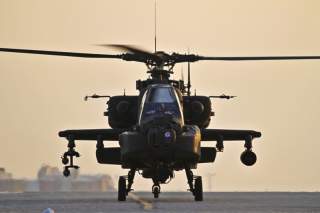 The U.S. Army faces a budgetary dilemma when it comes to its aviation portfolio, the largest single cost item in its budget. In essence, it is being required to maintain a large but aging fleet. While there is money going to the Future Vertical Lift program, it is by no means clear when or even if this effort will produce a set of affordable next-generation platforms. In the meantime, not only does the Army have to keep its existing helicopter fleets in the air but invest in some critical upgrades such as improved engines, defenses against manportable anti-aircraft missiles and guidance systems to address flying and landing in inclement weather and during brownouts.

The National Commission on the Future of the Army made several recommendations that, if implemented, will only complicate this picture. It recommended retaining the 11th Combat Aviation Brigades (CAB) and forward deploying one of these to South Korea. The cost of this decision alone is several hundred million dollars annually. It also found a face saving but expensive compromise to the Army’s Aviation Restructuring Initiative which kept a reduced number of Apache helicopters in the National Guard.  Retaining Apaches in the National Guard would have a one-time cost of at least $420 million plus as much as $165 million a year in increased upkeep. The Commission recommended slowing the rate at which new Black Hawks (UH-60s) were procured, a decision that would undermine at least some of the savings garnered from the current multiyear procurement contract, as well as ensure that the existing fleet ages even faster and costs more to maintain.

The Commission’s recommendations regarding aviation might be less of a problem if Army aviation assets weren’t in such high demand. Helicopters are in constant use in Afghanistan and increasingly so in Iraq. A CAB may end up back in Europe shortly as well as one in South Korea. The greater the demand, the more wear and tear on these assets and the higher the maintenance bills. So the Army faces the unenviable position of having to maintain an aviation force that will be large, but potentially less capable and certainly older and more expensive to maintain.

How can the Army save money in its aviation portfolio? One obvious way is to do what the U.S. Navy has done with its fleet of Black Hawks, the H-60 Sea Hawk. Since 2004, original equipment manufacturers Sikorsky and Lockheed Martin, operating as the Maritime Helicopter Support Company (MHSCo), have been responsible for sustaining much of the Navy’s Sea Hawk fleet under a performance-based logistics (PBL) contract.  Traditional sustainment contracts are a fee-for-service arrangement. In essence, the providers get more money the worse the platform performs. Under a PBL contract, the contractors are paid based on specified outcomes such as level of readiness, number of platforms available and even number of hours in the air. In essence, it is in the interest of the contractor to make sure the platforms work well. Moreover, under a PBL arrangement the contractor bears the risk burden and has the motivation to take prophylactic measures to ensure optimum performance of the platform and its systems.

The Sea Hawk PBL, an award winning program, manages some 5,000 parts and supports more than 300 helicopters around the world. Since 2004, the program has exceeded availability requirements by 10 percent, and achieved a 97 percent success rate in providing needed replacement parts and spares. More significantly – U.S. Army take note – the Sea Hawk PBL has resulted in a reduction in spares inventory of more than $1 billion, provided process savings worth $22 million annually and reduced costs per flying hour by 17 percent. Last year, the Navy awarded MHSCo its third five year PBL contract.  The new contract awarded last year will manage a larger number of parts and will encompass the entire Sea Hawk fleet, more than 500 aircraft.

The Army took one right step when it agreed to a multiyear procurement contract for new UH-60s. It should take another one by pursuing a PBL-based sustainment contract for the existing fleet of Black Hawks. The requirements for this new contract should reflect the successes of the Navy’s current Sea Hawk PBL contract.  The results would be greater availability, more responsiveness and reduced costs.  The Army aviation community needs all three.