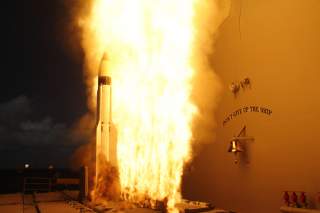 Japan has a Self-Defense Force rather than a traditional military, because since World War II its constitution has forbidden engaging in warfare abroad. Nonetheless, the island nation finds itself menaced by North Korea, in part due to the presence of American military bases—a threat Pyongyang underscored way back in 1998 when it shot a Taepodong-1 missile testbed across Japanese airspace.

There have been many more North Korean missile tests since—one just today. While Pyongyang is still working on an intercontinental ballistic missile with the range to hit the West Coast of the United States, Japan lies well within striking distance of its medium- and intermediate-range ballistic missiles (IRBMs). These could hit the Japanese main islands within ten minutes after launch.

Tokyo has responded to the threat with its own countermeasures, which currently include six air-defense missile groups armed with PAC-3 Patriot surface-to-air missiles, as well four destroyers armed with longer-range SM-3 missiles. However, it’s not clear whether either system would prove entirely effective at intercepting larger, faster and higher-flying IRBM missiles. The Mach 4 PAC-3, for example, has an effective range of roughly thirty kilometers against theater ballistic missiles, making it viable only for localized defense.

To meet the challenge, new super-long range version of its SM-3 naval missile is being jointly produced by Mitsubishi and Raytheon, designed to intercept IRBMs during the takeoff and midflight phase. Unfortunately, the new missile recently failed its second live-fire test, underscoring how ballistic-missile defense systems remain a work in progress. Nonetheless, Japan appears to be moving rapidly towards procuring a land-based component to its SM-3 force, to supplement its ships at sea.

The Standard Missile 3, also known as the RIM-161, enables U.S. Navy destroyers and cruisers to contribute to the missile-defense mission. These vessels make sense as mobile firing platforms, as they already equipped with the Aegis Combat System, which efficiently networks powerful radars with sophisticated fire-control computers, and Vertical Launch Systems that can store numerous missiles. Moreover, as ballistic missiles have acquired the precision to potentially serve as deadly antiship weapons, an antiballistic-missile system may potentially play a self-defense role for the warships as well.

The three-stage solid-fuel rocket powered SM-3 is guided to the target by naval SPY-1 radars, with assistance from GPS and satellites. As it approaches the target, it deploys a Lightweight Exo-Atmospheric Projectile designed to destroy incoming missiles through kinetic energy alone, known as “hit to kill” because it does not rely on conventional explosives. The design has successfully intercepted targets in around 70 to 80 percent of live-fire tests, including weapons with separating reentry vehicles and tougher-to-hit medium-range ballistic missiles. It can also shoot down satellites.

You can see footage of a successful SM-3 ballistic-missile intercept, conducted by a Japanese destroyer, here.

Japan currently operates four Kongo-class destroyers, armed with the Aegis combat system and SM-3 Block I missiles, and is currently upgrading its two newer Atago-class vessels with Baseline 9 upgrades, to give them antiballistic-missile capabilities as well. The Block I missile can travel up to ten times the speed of sound, and has a range of nearly 380 miles.

Unfortunately, this is still not far enough for half a dozen ships to adequately cover the Japanese home islands. Furthermore, some critics are doubtful that the Block I kill vehicles can generate enough kinetic energy to reliably destroy the warheads on incoming missiles, even if they take out the rockets carrying them.

In fact, way back in 1999, Japan and the United States signed a cooperative agreement to jointly pursue a heavier, faster and longer-range version of the SM-3. By 2012 the Pentagon had already invested $1.5 billion in the project, with Japan throwing in a similar sum. The resulting twenty-one-inch-diameter SM-3 Block IIA missile only has the first-stage rocket motor in common with its 13.5-inch predecessor, basically occupying all the space available in the standardized Mark 41 Vertical Launch System cells on U.S. Navy ships.

The Block IIA has a theoretical maximum range of 1,350 miles, and can travel at speeds exceeding Mach 15. It has a much larger and more maneuverable “high divert” kill vehicle for intercepting and smashing apart its targets. An enhanced two-color infrared sensor on the kill vehicle also helps it discriminate the targeted warhead from decoys and debris.

On February 3, 2017, a Block IIA missile fired from USS John Paul Jones successfully intercepted a ballistic missile in space as part of its first live intercept test, which you can see in the video here.

Unfortunately, the missile failed to intercept its targets on a second test on June 22, with analysis of what went wrong still pending.

Of course, a single failed test out of two does not mean the Block 2A will prove ineffective—but it does demonstrate how tricky the job of intercepting ballistic missiles can be to get right. The longer-range Ground-based Midcourse Defense system based in Alaska and California has suffered a failure rate approaching 40 percent in trials, often due to obscure flaws in the circuitry. Nor is it easy to conduct a lot of tests when the missiles involved are so expensive: the Block II missiles estimated to cost more than $20 million each. On the other hand, it’s important to keep in mind that testing conditions are often more favorable than realistic combat conditions, so when a system still does not work under those circumstances, it constitutes grounds for concern.

However, the Block II SM-3 seems far more flexible in range and target profile than a short-range defense system like the THAAD or the Patriot PAC-3—that is, if it manages to demonstrate a similar success rate in tests to the Block I despite its recent failure. Though not designed for the mission, the SM-3 might also be somewhat effective against ICBMs targeting North America. If so, Aegis ships stationed off of American harbors could easily provide defensive coverage for the United States. In any event, the Block IIA missile is scheduled to enter service in 2018, presumably as long as it proves more successful in subsequent testing.

Japan is still mulling how to further buttress its defenses against the missile threat. Two upcoming new destroyers will also be armed with SM-3s for the missile-defense mission. Initially, it was also speculated that Tokyo would pursue the Theater High Altitude Air Defense system that the U.S. military already has stationed in South Korea and eastern Europe. The shorter-range (around 120 miles) THAAD is designed to intercept missiles in as they plunge towards the earth in their terminal phase, which could afford Japan a “third layer” of defenses to supplement the SM-3s and PAC-3 missiles.

However, shortly after North Korea tested a Hwasong-12 IRBM on May 14, Japanese Defense Minister Tomomi Inada revealed Japan was more interested in acquiring additional ground-based SM-3 missiles, for a system known as Aegis Ashore. Aegis ground stations in Japan would not only contribute more SM-3 launchers, but also bolster radar coverage with additional SPY-1D radars that would network with ships at sea, mutually reinforcing their effectiveness. The U.S. military is already planning to deploy Aegis Ashore to Poland, including twenty-four Block IIA interceptors. According to Japan Times, just two land-based Aegis units could provide coverage for all of Japan, at a cost of around $712 million each—a significantly cheaper price than for THAAD.

Reports in the last week of June indicate Tokyo is ready to fast-track the deployment of Aegis Ashore, as tensions continue to heighten in Korea. Perhaps if Japan can muster enough ground- and sea-based interceptors—not a given, as even the U.S. Navy lacks enough SM-3 Block I missiles to arm all of its Aegis ships at once—it could put up enough missiles to assure a high probability of a kill, even if each is individually not guaranteed of hitting. Of course, while it is nerve wracking not knowing how truly reliable ballistic-missile defenses would prove in practice, it would be far preferable never to have cause to find out.