Can India and China Both Become Great Powers? (Or Are They Destined to Fight?) 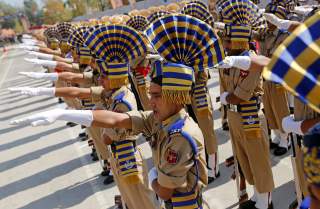 China and India have a complex and prickly relationship: a consequence of geography, history and recent experiences between the two.

An unresolved territorial and border dispute led to a brief war between the two countries in October 1962, and the humiliation of India in that confrontation remains part of its collective national memory. This reality shapes India’s response to China’s increasing influence and power in the region today.

When it comes to assessing national power, the differing trajectories of Chinese and Indian GDP since 1960 and the current disparity between them is quite stark. In 1960, China’s GDP was half that of India’s. In 2017, China’s nominal GDP is estimated to be US$11.8 trillion, while India’s is closer to US$2.45 trillion. China has successfully ‘risen’ and some expect it to displace the United States as ‘number one’ within a decade.

Despite this, democratic India remains the intangible challenge in Asia for Beijing.

India’s efforts at enabling the birth of Bangladesh in December 1971 stoked a deep anxiety in China, and Beijing came to the conclusion that India had to be contained within the subcontinent and kept in a state of extended disequilibrium.

This geopolitical template provides the context for the strategic partnership that China has maintained with Pakistan since the early 1970s. Beijing has used its comprehensive economic and military capability to enhance its footprint in India’s neighbourhood, including in Bangladesh, and most recently the Maldives. Most of these states have become heavily dependent on China rather than India for their economic and military needs — partly because of the difference in the two countries’ military and economic power.

Bangladesh illustrates how growing Chinese power has shrunk India’s profile. Over the past decade China has displaced India as Bangladesh’s largest trading partner — in 2015, imports from China (including Hong Kong) were 27 per cent of Bangladesh’s total imports, while India held closer to 12 per cent. The Bangladeshi military is also importing material from China (including submarines). So two of India’s closest neighbours — Pakistan and Bangladesh — are becoming more dependent on Beijing, compounding India’s security dilemma.

But China’s strengthening military relationships in the region and an unresolved India and China on the Doklam plateau from June to August 2017 are only part of India’s security challenge.

China’s investment in the aims to help it overcome the ‘Malacca dilemma’ in which most of its energy supply needs must pass through the Straits of Malacca. The Chinese investment in ports along the Indian Ocean littoral has often been described as a string of pearls, and both Gwadar in Pakistan and the Chinese military station in Djibouti indicate a near-permanent Chinese presence in the Indian Ocean.

So how has this spread of Chinese power affected India?

The Indian response to the spectrum of challenges presented by Chinese power is multipronged. Doklam is a reflection of the current Indian resolve to act unilaterally and remain firm, even if China adopts an intimidating posture.

At the bilateral and multilateral levels, India’s Modi government is exploring new partnerships, particularly in the maritime domain. Good order at sea and freedom of navigation in the Indo-Pacific is now packaged as a collective security objective, and China is being encouraged to come on board. India’s bilateral partnerships with the United States and have acquired a visible naval and maritime sheen, and the possibility of this evolving into a with Australia as a partner has been endorsed by President Trump on his recent trip to Asia.

If this acquires greater military and policy credibility, then a ‘diamond necklace’ could emerge — stoking the Malacca dilemma in an unambiguous way.

Much will depend on the domestic politics in the four democracies — India, Australia, Japan and the United States — and the degree to which their corporate and security elites harmonise their views about how to manage China.

But the exigency to constrain China by suasion will not unfold in a linear manner, nor is it set in stone. The US–China relationship is more opaque and deeply intertwined than it publicly appears. Trump’s five-nation tour through Asia in November 2017 and its outcome will offer valuable cues about how Beijing under a more confident Xi will use its power and the degree to which can accommodate it.

Whether China becomes more revisionist or is willing to maintain an evolving status quo in global affairs will have significant regional implications that will shape India’s response in the longer term.

Chitrapu Uday Bhaskar is a retired Indian Navy Commodore and Director of the Society for Policy Studies, New Delhi.

This article appeared in the most recent edition of East Asia Forum Quarterly, ‘China’s influence’ and can be read online here.