Can North Korea Attack the United States Right Now with a Nuclear Weapon? 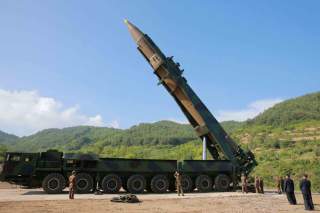 The answer depends on who one chooses to believe.

While some intelligence agencies and analysts believe the North Koreans already have the technology to target the American homeland, others say that it will take some time before Pyongyang has the reentry vehicles and miniaturized nuclear warheads ready for operational use.

As the Diplomat’s Ankit Panda has reported, the Central Intelligence Agency assessment of Pyongyang’s July 28 ICBM test states that North Korea failed to demonstrate that the missile’s reentry vehicle (RV) could survive entering the Earth’s atmosphere. However, the CIA assessment also reportedly states that the reentry vehicle would perform adequately if the missile were fired on a normal rather than on a lofted trajectory. The U.S. Air Force’s National Air and Space Intelligence Center backs up the CIA’s assessment, according to Panda’s report.

Meanwhile, the Pentagon’s Defense Intelligence Agency has reportedly assessed that North Korea has already developed the miniaturized nuclear warheads that would fit inside the RV.

South Korean officials, however, said that they do not believe that the North Koreans have perfected an RV for their ICBM. The South Korean position seems to be that Pyongyang is at the same point in the development of the their missile as the Soviet Union was on Aug. 21, 1958, when it launched the R-7—the world’s first ICBM. While the R-7 proved that the Soviet Union had the necessary rocket technology, it had not completed development of an RV that could carry a nuclear bomb—but it was very close.

"We don't feel they've reached that point yet but it's true they are approaching it. We can't pinpoint the exact timing, but it will take at least one to two more years."

American analysts offered a range of views. Some are convinced that North Korea already has the capability to hit the United States with a nuclear-tipped ICBM while others are not. All are agreed that North Korea is working on the technology and it is rapidly making progress on achieving its goals.

Among the experts that believe this North Korea already has the capability to hit the United States with a nuclear-tipped ICBM is Jeffrey Lewis, director of the East Asia Nonproliferation Program at the James Martin Center for Nonproliferation Studies at the Middlebury Institute of International Studies at Monterey. “I don't see any reason to doubt that North Korea can hit the U.S. with a nuclear weapon,” Lewis told The National Interest.

Arms control expert Joseph Cirincione, president of the Ploughshares Fund, told The National Interest that he believes that while North Korea is close to an operational ICBM capability, but it will take some time before the weapon is ready for deployment. However, Pyongyang might be able to rush the missile into service in an emergency.

“Can the North Koreans actually attack us?  I believe that they could not have confidence in their ICBM but could be more confident of the well-tested short- and medium-range missiles that can likely hit South Korea and Japan with nuclear warheads,” Cirincione said.

“I believe it will take the North Koreans several more years to clear the operational hurdles, including guidance, re-entry vehicle and reliability. But they are getting there rapidly. In a pinch, they could field a missile next month and declare it operational. Would it work? Likely neither we—nor they—would know for sure.”

Kingston Reif, director for disarmament and threat reduction policy at the Arms Control Association told The National Interest that it is not clear where the North Koreans are in terms of having a reliable ICBM.

“It is not clear if North Korea has mastered all of the technologies required to have a reliable capability to strike the United States,” Reif said.

“It has so far conducted two ICBM tests and is likely to want to conduct additional tests to increase confidence in its capabilities. Recent reports indicate that the bulk of the U.S. intelligence community believes that North Korea has successfully developed a compact, lightweight warhead design to put atop an ICBM, though the confidence level associated with that determination is not public. But if North Korea hasn't already mastered the required technologies, on its current testing and development pace it will likely do so soon.”

The fact that North Korea is so close to developing an operational ICBM capability means that the United States must take urgent action. That does not, however, necessarily mean a preemptive military operation.

“Unfortunately the Trump administration does not appear to have such a coherent strategy. That needs to change - and fast.”

Cirincione noted that once North Korea has fielded an operational ICBM, the weapon would likely be fitted with decoys and other countermeasures that could render U.S. ballistic missile defenses irrelevant.

The bottom line is that the United States will have to stop North Korea from fielding an ICBM before it is operational or simply live with a nuclear-armed Pyongyang that can hit the American homeland.

“North Korea will soon be able to hit most cities in the United States with a nuclear warhead and we won't be able to stop that missile once it is launched,” Cirincione said.

“That is why we urgently need to negotiate a freeze on their testing of missiles and nuclear weapons. Having a small arsenal is bad enough. Having a deployed force of 100 ICBMs is far worse.”