Can This Strategy Game Predict Whether Clinton or Trump Will Win the White House? 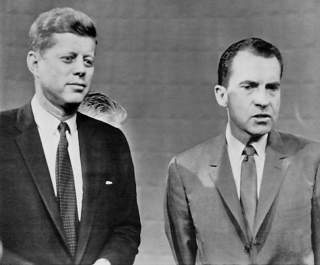 An elitist liberal Democrat running for the White House. A Republican opponent dogged by questions over his morals. An electorate polarized over civil rights.

Remember that the next time someone says your vote doesn't count.

The Kennedy-Nixon contest is the subject of "1960: The Making of the President", a strategy game of that epic race for the White House. If you think that today's politics are crazy, consider that in 1960, JFK -- America's first and only Catholic President -- had to promise worried voters that he wouldn't take orders from the Pope.

In the "1960" game, two players step into the shoes of a campaign manager directing the Democratic and Republican campaigns. The game is played on a roughly 2-foot by 2-foot cardboard map of the United States. On the map are the 50 states, each with a certain number of electoral votes. Something that immediately jumps out is how much the electoral landscape has changed in 56 years. California had 32 electoral votes in 1960 versus 55 today, Texas has grown from 24 to 38, while New York's share of the electoral pie has declined from 45 to 29.

Instead of the 538 electoral votes of today, there were 537 in 1960. Whichever candidate wins 269 votes earns the right to sleep in the White House.

Determining who obtains these electoral votes is determined by little wooden cubes (blue for the Democrats and red for the Republicans, of course), the sort that you find in a game of Risk. Whichever party has more cubes in a state at the end of the game (Election Day) garners its votes. If a party has placed at least four cubes in a state, it is considered to have a lock on that state, which makes it harder for the opposition to place their own cubes there.

Players gain cubes by playing Campaign Cards: each player randomly draws six cards every turn. Each card offers 1 to 4 Campaign Points, which are the lifeblood of "1960." Think of them as the money and effort that pays for the election signs on your neighbor's lawn, the TV and radio ads that blanket the airwaves, and the political telemarketers that interrupt your dinner.

There are many things that Campaign Points can be spent on -- and many things that they need to be spent on. Each Campaign Point allows you to place one of your party's cubes in a state. Or, you can remove one of your opponent's cubes (negative campaigning). "1960" is a zero-sum game: you can't place your cubes in a state until all of your opponent's cubes are removed from it.

And that, my fellow Americans, is the name of this game. Getting your cubes into key states, kicking your opponent's cubes out, and doing it faster than he can do it to you. In one game of "1960" that I played, JFK (me) concentrated on locking in electoral powerhouse California. But my opponent (Nixon) focused on picking up the numerous small states in the West and the Rockies. I could have dueled with him for control over Cascadia and the Flyover States, but I stuck with California. Yet it turned out that the small fry had more total electoral votes than California. Hence Watergate happened a decade early, because Nixon won the 1960 election.

As if a campaign manager's life isn't busy enough, there are still more options. One is to spend Campaign Points to buy advertising, which makes it easier to remove your opponent's cubes in states where he has a lock. Another is to spend CPs to buttress your strength on the three hot-button issues in in the game: Economy, Civil Rights and Defense (i.e., globalization, Black Lives Matter and ISIS. Some things never change). Having your cubes in the three boxes for these issues gives your campaign a boost.

Besides giving players Campaign Points, each Campaign Card offers another goodie: an historical event that occurred in the actual campaign. For example, the "Southern Strategy" card lets the Republicans place five red cubes in the South, while "Hostile Press Corps" makes it harder for Nixon to place any cubes. On the other side, the "Catholic Voters" card lets the Democrats place seven blue cubes in any states, while "Norman Vincent Peale" lets Nixon remove five blue cubes. A nice touch is that some cards can be played to block others. When Nixon casts the "Baptist Ministers" card to gain cubes, Kennedy can stop the clerical crusade with an endorsement from the "Greater Houston Ministerial Association" card.

"1960: The Making of the President" captures the bizarre and colorful madness that make American presidential elections so fascinating as well as frustrating. For example, the game includes a "Lazy Shave" card, where Nixon's five o'clock shadow during his debate with JFK dings his popularity (ditto the "Tricky Dick" card).

Yet what "1960: The Making of the President" offers most of all is the chance to step into the shoes of a campaign strategist. It's one thing to read that Hillary Clinton's campaign is debating whether to focus on maintaining control of Blue states where she is already ahead, or whether to expand into states that have been Red for years. But it's another thing to experience hands-on why this is such a dilemma.

In "1960," you don't have enough resources to capture the states you need, and keep your opponent out of states that he needs, and buy advertising, and increase your candidate's visibility on hot-button issues. Perhaps your opponent is making a push to capture Ohio, so maybe you need to spend Campaign Points to remove his cubes and frustrate his strategy. But then again, you need to spend those CPs to pursue your own strategy, such as locking in California. Meanwhile, you need to buy advertising and stake out support on vital issues.

Would you believe that Kennedy and Nixon each have a token in the game, and they can collapse from exhaustion if you push them too hard?

Politics is not for the faint-hearted.

Image: John F. Kennedy and Richard Nixon prior to their first debate in Chicago in 1960. Wikimedia Commons/Public domain