Can the Army Get Ready for War with Russia and China and Fight Terror Too? 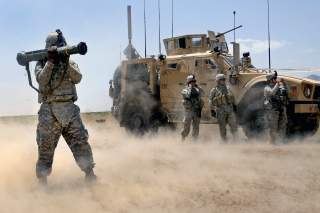 The United States Army will receive increased funding in the President’s fiscal year 2019 budget proposal as the service struggles to modernize while simultaneously fighting wars in current conflicts. The problem the Army must solve is how to deter Russia and China while dealing with today’s challenges.

“The Army supports the 2018 National Defense Strategy by providing a combat-credible war-fighting force, postured and capable of deterring global competitors, preventing conflict and shaping the global security environment,” Maj. Gen. Paul A. Chamberlain, Army budget director told reporters. “The revisionist powers of China and Russia, the rogue regimes, such as Iran and North Korea, along with transnational threat organizations, particularly terrorist groups, pose a broad range of very real threats to U.S. interests. Our regional competitors in the Pacific and in Europe have been studying our strengths and our vulnerabilities for more than a decade. Their modernization efforts are slowly eroding our competitive advantage, and this budget request addresses that, by providing the necessary resources to ensure the Army's superiority.”

Chamberlain summed up the basic problem the service faces. “The Army must be able to, if necessary, win in a multi-domain battlefield, a battlefield that requires integrated capabilities in fires, cyber, electronic warfare and space, and be capable of striking the enemy and improving friendly survivability against a sophisticated enemy in a contested environment,” Chamberlain said. “The Army's role and the nation's ability to maintain peace through strength requires us to refocus and strengthen our force-on-force decisive action capability, maintain our counter-insurgency competencies for the current fight, and develop superior capabilities for warfare in all domains.”

The fiscal year 2019 budget should help the Army meet its goals. “With this budget submission, the Army continues its efforts to become more lethal, resilient and ready in order to face current and future threats,” Chamberlain said. “The budget themes listed represent the framework from which the Army will provide the combatant commands the best trained and ready land forces in the world.”

One of the key features of the Army budget is the war on terrorism. “This budget request funds ongoing counter-terrorism and counter-insurgency operations around the globe,” Chamberlain said. “It also funds counter-terrorism and counter-insurgency training, ensuring the competencies mastered over the past decade and a half of fighting are sustained.”

The Army has six modernization priorities in this budget proposal. “In fiscal year '19, the Army will continue to empower cross-functional teams to champion the six modernization priorities: long-range precision fires, next generation combat vehicles, future vertical lift, the Army network, air and missile defense and soldier lethality, in order to bring new and emerging technology to the battlefield sooner,” Chamberlain said. “Ultimately, these modernization efforts will allow the Army to expand technological overmatch and competitive advantage against near-peer competitors and prepare for other emerging threats, resulting in a more lethal combined arms force that is capable of responding rapidly to a global crisis.”