Can the Navy Beat Its Greatest Foe? And No, Not Russia, China or North Korea. 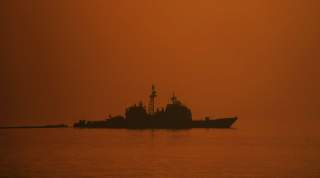 With the USS John S. McCain (DDG-56) knocked out of commission after a collision on Aug. 21 in the Straits of Malacca, the United States Navy is down two ballistic missile defense-capable Aegis destroyers in the Pacific.

With USS Fitzgerald (DDG-62) being also being knocked out of action after a June 17 collision off the Japanese coast, the loss of the two vessels from operational service could not come at a worse time for the Navy, which needs of all the ballistic missile defense assets it can get to deal with the North Korean threat. Nor does the Navy have a good way to mitigate for the loss of those vessels—the 275-ship fleet is already stretched thin.

“The U.S. combat fleet is already over-stretched,” Seth Cropsey, director of the Center for American Seapower at the Hudson Institute told The National Interest.

(This first appered in August.)

“Being short of two Aegis-equipped DDGs that provide ballistic missile defense while North Korea is threatening to launch ballistic missiles at local U.S. targets or allies is deeply unhelpful and regrettably timed. The overall impact on the Navy should be measured not only in the loss of sailors’ lives and unavailability of the ships as they are repaired but in the possibility that requirements have exceeded capabilities so far that the training needed to avoid such accidents has been impaired.”

“Two fewer DDGs—I believe both of which are BMD equipped—leaves a sizable hole in a fleet that is already too small for what is being asked of it in the Western Pacific,” McGrath told The National Interest.

“I imagine that the Navy will have to move ships out of their regular cycles from Hawaii and CONUS [continental United States] to cover down on Pacific requirements.”

It will not be easy to cover for the loss of the two destroyers, explains Bryan Clark, a senior fellow at the Center for Strategic and Budgetary Assessments.

“With two FDNF (Forward Deployed Naval Forces) DDGs out, the Navy would either need to forego some operations, work the remaining 10 cruisers and destroyers harder, or bring ships from Hawaii or CONUS to cover for them,” Clark told The National Interest.

Indeed, the fact that the Navy is forcing its fleet to do more with fewer ships to perform its global mission might have contributed to both collisions.

“Since the workload in FDNF may be a contributing factor to the collisions, the Navy would probably use ships from Hawaii from CONUS to cover for the loss,” Clark said.

“If those ships are following the Optimized FRP (Fleet Response Plan), the Navy will need five ships to cover for the two lost from FDNF.  Each FDNF ship maintains an about 50 percent OPTEMPO, and an OFRP ship is about 20 percent deployed (one 7-month deployment each, 36 months).”

In fact, because the fleet is being pushed so hard, the Navy might be using its time at sea to train during operational deployments because there is no other option, Jerry Hendrix, director of the Defense Strategies and Assessments Program at the Center for a New American Security, told The National Interest.

“Something has to give, and right now, it’s training,” Hendrix said.

“A year ago, or two years ago, it was maintenance, but now it’s training. We’re probably trying to make up training while we’re underway during the deployment because there just isn’t enough room in the schedule to get it all done.”

“We need those 50 to 75 frigates—not to mention more fast attack submarines—to make up those gaps,” Hendrix said.

But ships take time to build. What the Navy can do immediately is to bring retired Oliver Hazard Perry-class frigate back into the fleet as a stopgap.

“You can use things like the Perrys with some missiles to do the show-the-flag missions until we can get the new frigate up and you could probably get eight ships right there,” Hendrix said.