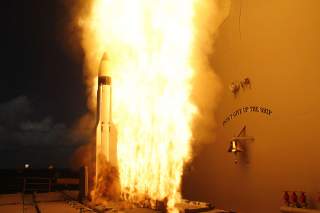 The recent test of a North Korean intercontinental ballistic missile has thrust America’s ballistic-missile defenses in the spotlight. The new missile, known as Hwasong-14, can theoretically reach Alaska or Hawaii. At the same time, there are several U.S. military bases abroad, especially in the Asia-Pacific, vulnerable to North Korean missiles. How does the Pentagon plan to defend American territory and installations abroad?

The Hwasong-14 missile is a new intercontinental ballistic missile (ICBM). Being a new design, it is likely hobbled by many factors, including a lack of reliability and a warhead that cannot survive reentry. Still, as the small country has repeatedly demonstrated, North Korea’s talented scientists and engineers can overcome engineering obstacles and make missiles that work. It is only a matter of time before Pyongyang fields a reliable ICBM capable of targeting the continental United States.

ICBMs are challenging missiles to shoot down. The long distances ICBM must travel dictate that their warheads come in high and fast. The most practical phase of flight to shoot them down is in the so-called midcourse phase, after the missiles have boosted their warhead payloads into space. The warheads spend several minutes traveling through space, hurtling towards their target, before streaking back down through the atmosphere in the so-called terminal phase.

The United States is currently protected from ICBM attack by the so-called Ground-Based Midcourse Defense system, or GMD. GMD is not just the interceptor missile, but a whole system of sensors and weapons designed to detect and neutralize incoming warheads in a matter of minutes.

The front line of GMD is the worldwide network of X-band ballistic-missile defense radars, including the AN/TPY-2 and the Sea-Based X-Band radar, also known as the “Giant Golf Ball.” These radars would detect, identify and provide tracking data to the GMD’s battle management command, control and communications operators of the 100th Missile Defense Brigade, based in Colorado Springs.

Once a picture of the threat has been developed, along with tracking data for the incoming missiles, the United States would launch Ground-Based Interceptor missiles at the incoming warheads. GBI consists of a multistage missile, itself much like an ICBM, with an exoatmospheric kill vehicle (EKV) instead of a warhead. Once in space, the EKV steers itself into the path of the incoming warhead, destroying it.

The United States currently has thirty-six Ground-Based Interceptors, with thirty-two at Fort Greely, Alaska, and another four at Vandenberg Air Force Base in California. Based on testing, outside analysts believe each GBI has a 50/50 chance of destroying an incoming warhead. The Pentagon’s plan, as plan as understood by outsiders, is to allocate five GBIs per incoming warhead—according to the law of averages, five GBIs should cumulatively have a 100 percent chance of destroying an incoming warhead. Given the number of GBIs, the U.S. defense shield has enough to reliably intercept about seven enemy missiles. More missiles can be added to the system as needed.

The main defensive system to shoot down North Korean missiles in this area would be the Navy’s fleet of sixteen ballistic-missile defense cruisers and destroyers based in the Asia-Pacific, with five forward based at Yokosuka, Japan. These ships (of which the USS Fitzgerald, recently damaged in a collision with a civilian container ship, was one) use the Aegis Ballistic Missile Defense System, including the giant SPY-1 phased array radar, to detect and track incoming short-, medium- and intermediate-range missiles. Navy BMD ships can also take tracking cues from the Army’s AN/TPY-2 long-range antimissile radars, which are typically deployed with THAAD missile units.

Once the incoming threats are identified, a properly equipped destroyer and cruiser, of which there are about six in the Asia-Pacific, can launch the latest operational variant of the SM-3 ballistic-missile interceptor. Like GBI, the SM-3 intercepts incoming warheads in space. The latest operational version is the SM-3 Block 1B. Developed in cooperation with Japan, the SM-3 is continually improving; the new SM-3 Block 2A has been tested twice, succeeding once in intercepting its target.

U.S. military bases scattered across the Asia-Pacific are closer to North Korea and would face threats of a different nature. Depending on their distance from the launch location, U.S. bases would be targeted with short-, medium- or intermediate-range missiles. The longer range the missile, the higher and faster it flies, so these missiles are actually easier to intercept: while an ICBM warhead may plunge back down to Earth at up to Mach 25, an IRBM warhead typically reenters the atmosphere between Mach 7 and 8.

The main means of defense for U.S. forces in the region are THAAD missiles. Standing for Terminal High Altitude Area Defense, THAAD was developed during the Cold War to stop Soviet battlefield ballistic-missile strikes. THAAD operates in conjunction with the AN/TPY-2 radar, which provides detection and tracking data. With a range of 125 miles, THAAD can protect a reasonably large area from short-, medium- and intermediate-range missile strikes. The entire system is mounted on trucks and trailers, and is thus road mobile. There are six launch vehicles with eight missiles each per battery, providing a total of forty-eight ready-to-fire missiles.

THAAD is deployed in South Korea, where two launch vehicles (sixteen missiles) are operational and four others are being held up by political issues. Another three launch vehicles are based on the island territory of Guam.

The second, lower tier in missile defenses for U.S. forces overseas is the Patriot PAC-3 missile. As a smaller version of the original Patriot PAC-1, a Patriot missile launcher can carry four times as many PAC-3s. In a defense scenario, a Patriot battery will launch a missile in the direction of an incoming warhead. Once the missile is relatively near the warhead, the PAC-3s Ka-band radar seeker switches on and makes adjustments to place the PAC-3 in the path of the missile. PAC-3 has the shortest range of all ballistic-missile interceptors, and is more suited to protecting specific targets, such as military bases, ports and cities. It can even take cuing information from nearby Aegis ships, intercepting any warheads that leak through the midcourse intercept stage.

The United States has developed a fairly effective defense designed to protect against complex attacks. While the missile system would be nearly useless against large-scale missile attacks by China or Russia, by all accounts it should be useful against smaller state actors such as North Korea that have a limited number of missiles. That having been said, if just one nuclear warhead leaks through and hits its American target, that will be all it is remembered for. Nuclear warfare is one field of warfare where, at least for the foreseeable future, the advantage will lie with the attacker and not the defender.