Can U.S.-Vietnam Relations Move Above and Beyond the China Challenge? 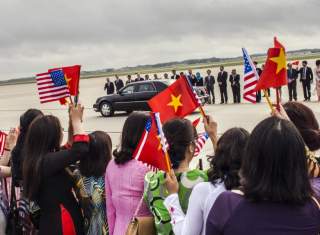 On Sunday, President Obama arrives for his first visit to Vietnam. It is surprising the trip has taken this long given the dramatic improvements the Obama administration has achieved in U.S.-Vietnam relations. As an element of its ‘pivot’ to the Asia-Pacific region, the United States has increased the strategic nature of its dialogue with Vietnam, enhanced cooperation on regional issues and expanded economic connectivity. From Hanoi’s perspective, U.S.-Vietnam relations represent an increasingly “independent” relationship – meaning Vietnamese leaders consider policy approaches towards the United States on their own terms, without weighing the potential implications to its relationship with China. The Obama visit provides an opportunity to forge a stronger bilateral partnership with its own compelling vision for the future and means to achieve it.

Over the past several years, China has clearly been a driving force behind improving U.S.-Vietnam ties. While unintended by Beijing, China’s assertiveness in the South China Sea and willingness to employ economic coercion to achieve political ends has underscored to Vietnam’s leaders the need to diversify its strategic and economic engagements. The United States has been a beneficiary of this shift in policy, but is not alone – Vietnam has also taken unprecedented steps to improve relations with Japan, enhance ties with India and consolidate its regional engagements bilaterally and through ASEAN.

A reactive foreign policy, however, has inherent limits. It is in both the U.S. and Vietnamese interests to ensure the pace and scope of bilateral ties are not set by the ups-and-downs of Vietnam-China relations. Ultimately, an independent U.S.-Vietnam relationship will widen the aperture of potential areas for cooperation and could provide more stability in Vietnam’s relationship with China. To build an enduring and comprehensive U.S.-Vietnam partnership, it will be essential to concurrently advance four specific areas.

First, the two sides must carefully address lingering war legacy issues, which remain unresolved and deeply sensitive. Without steady care and progress, the issues wait as potential flash points to undermine domestic support for closer ties. The United States is wisely keeping the President’s visit future-oriented, while tending to the past through cooperation on service members missing in action, remains recovery, and Agent Orange clean-up.

Second, it will be essential for Vietnam to respect the universal human rights of its people. During the historic visit of Vietnam Communist Party Secretary General Trong to Washington last year, the United States assured him that U.S. policy is not bent on regime change or undermining the Vietnamese system. On the contrary, it is the imprisonment of religious leaders, stifling of public dissent, and restrictions on dialogue, including online, which weaken governments and undermine legitimacy. A robust human rights agenda is one of the foundations of the U.S. pivot, necessary for forging stronger government and people-to-people ties. While the two countries have improved dialogue on these issues, human rights violations will place a ceiling on bilateral relations.

Third, it is vital for the strategic relationship to evolve from dialogue to building true habits of tangible cooperation. The two sides have made great strides, engaging in frank and direct bilateral discourse and increasing alignment in multilateral institutions. However, Vietnam is hesitant to work closely with the United States, such as eschewing joint military exercises, in part out of a perceived need to manage relations with China. The United States and Vietnam should start with less sensitive cooperation, such as bilateral humanitarian assistance and maritime disaster relief cooperation, which will allow the two sides to increase direct military contact while advancing a clear common regional good. Additionally, while Vietnam has placed tremendous importance on lifting the U.S. arms embargo, it has not yet clarified its intention for U.S. defense purchases and how they would align with Vietnam’s existing plans, such as the import of kilo-class submarines from Russia. The United States and Vietnam require an increasingly sophisticated defense dialogue which delves into defense priorities, needs, and expected equipment utilization.

Finally, the United States and Vietnam must take steps to broaden and deepen their economic relationship, which can provide a sustainable foundation for the future. Building on Vietnam’s 1986 Đổi Mới economic reform agenda, Hanoi is taking a number of additional steps to open its economy in preparation for the Trans-Pacific Partnership (TPP) and EU-ASEAN Free Trade Agreement. For instance, Hanoi is currently drafting a once a decade health and pharmaceutical law which could open the market for greater U.S. medical imports, investment and joint venture opportunities. U.S. and Vietnamese government agencies and private sectors are cooperating to increase Vietnam’s green economy. And large U.S. investors are increasingly looking for opportunities in Vietnam given the economic dynamism and demographic trends. To build on this progress, Hanoi must continue its governance reforms and ensure U.S. and other foreign economic interests have a level playing field in the Vietnamese market. Additionally, the United States can help Vietnam meet its national reform objectives through technical assistance and legal exchanges, particularly pertaining to labor rights.

The United States and Vietnam are poised to reach a more strategic partnership. In fact, the newly installed government in Hanoi may be uniquely suited to achieve this goal. This year, Vietnam’s Politburo was expanded in recognition of the challenges ahead. A number of skilled economic technocrats were elevated to the body, including National Assembly Chairwoman Ngan, Deputy Prime Minister Hue, State Bank of Vietnam Governor Binh, and Ho Chi Minh Party Secretary Thang. The Tufts-educated Foreign Minister Pham Binh Minh was also elevated, giving him a greater voice in Communist Party foreign policy.

Perhaps most importantly, Secretary General Trong remains at the head of government. The historically contentious National Party Congress earlier this year pitted Trong against then-Prime Minister Dung for the country’s top position. Dung, known for his tough response to China’s maritime assertiveness, emphasized his ability to work with the United States. Trong, in contrast, said he would improve relations with both the United States and China. In the end, greater “independence” in Vietnam’s foreign policy could help him reach that goal.