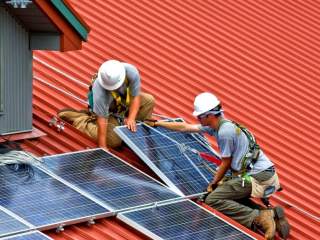 On Earth Day, the United States will sign the Paris Climate agreement. In terms of the actual climate policy already implemented by the Obama administration, however, the events of the previous week were much more important. Peabody Energy, the world’s biggest privately owned coal producer, declared bankruptcy, and SunEdison Corporation, the world’s largest solar-energy developer, entered into prebankruptcy negotiations. These bankruptcies are direct consequences of Barack Obama’s climate-change policies.

The Obama administration has relentlessly levied environmental regulatory actions to massively increase the costs and speed the end of coal production and its use for electricity generation.

Following the bankruptcies of Arch Coal, Alpha Natural Resources, Patriot Coal, and Walter Energy, Peabody’s Chapter 11 filing represents the final step in a death spiral in the coal industry that has seen a loss of $30 billion in stock market value and more than thirty thousand jobs.

A similar catastrophic decline has occurred in the coal-fired-electricity-generating sector of the economy. Adding up announced and planned plant closures, the Institute for Energy Research has estimated that utilities are in process of retiring coal-fired electric generating units that once provided over 72 GW of generating capacity, enough to provide electricity to every home west of the Mississippi, excluding Texas.

The fall of coal can, it is true, be traced in part to the rise of cheaper and cleaner natural gas. But there can be no doubt whatsoever that the primary aim of the raft of new Clean Air Act regulations promulgated by the Obama administration was to end the production and use of coal. He promised this in a 2008 interview with the San Francisco Chronicle, saying “So if somebody wants to build a coal fired [electricity generating] plant they can. It’s just that it will bankrupt them.” From the recently repromulgated rule limiting mercury emissions, through the Cross State Air Pollution Rule targeting sulfur dioxide, nitrous oxide and fine particulate emissions, to the Clean Power Plan limiting carbon dioxide, the cumulative effect of Obama administration rules targeting coal-burning electric utilities has been precisely those promised bankruptcies.

Obama was always upfront about the second prong of his climate policy, massive federal subsidies for renewable energy production. In his earliest major economic address to Congress in 2009, Obama announced a commitment to invest fifteen billion dollars a year in subsidies for wind and solar electricity generation and electric cars with the aim of making “clean, renewable energy the profitable kind of energy.” According to the Energy Information Administration, the Obama administration has almost achieved the first part of this goal, with annual subsidies for renewable electricity industry increasing from $8.6 billion in 2010 to about $13 billion in 2013.

The main lesson of those subsidies, however, has been that while it is easy to use regulations to increase cost and bankrupt an industry such as coal, it is far harder to use subsidies to ensure the survival, let alone the “profitable” success of a new industry to replace it.

SunEdison, which received about $1.5 billion in federal subsidies, is likely to be the most recent in a string of bankruptcies of federally subsidized renewable electricity producers. The largest of these is a Spanish company, Abengoa. With about $10 billion in external debt it is still seeking to refinance, Abengoa received U.S. subsides worth over $2.5 billion.

In any industry, some plants will not be as productive as expected, and some firms will fail. What the massive federal renewables subsidies have done is to accelerate the pace of and increase the cost of such failures in the renewables market. Fueled by subsidies, firms have pursued very risky and massively expensive technologies. Prominent examples are Abengoa’s Solana solar power plant in Arizona and Google/NRG Energy’s Ivanpah plant in California. Both Solana’s parabolic trough design and Ivanpah’s solar thermal towers were long-shot technologies, and neither has produced nearly the amount of power promised.

Renewable-power advocates would likely argue that such failures are to be expected and are fully justified by their potential environmental benefits and their acceleration technological development in the renewables sector. But as to the economic benefits, German and Spanish experience proves the opposite. Since 2000, Germany and Spain have used renewables subsidies of one form or another. Those subsidies worked all too well, increasing renewables capacity by so much that there is no room today for new renewables suppliers whose lower costs are due to international competition in the production and sale of old technologies such as solar panels, not speculative new ones. Many failures by U.S. subsidized renewable power providers can be traced in part to swift reductions in German and Spanish subsidies.

Moreover, even dramatic increases in renewable supply, as in Germany, do not do away with the need for old-style thermal power plants to provide power when the wind does not blow and the sun does not shine. In the United States, highly efficient combined-cycle natural-gas plants are in most places the lowest-cost option for such thermal power. As it is driven not by economics but by politics, subsidized renewable production creates uncertainty that is anathema to investment in additional thermal power supply.

There are also very real environmental costs of renewable power. These include the loss of massive amounts of land area required by commercial-scale solar and wind facilities, and the killing of sometimes enormous numbers of birds and other non-human species. Rather than considering the full social cost of renewable power generation, the Obama administration adopted a policy of ignoring the environmental costs of renewable power facilities. Until opposed by environmental groups, the Obama administration was ready to approve the Calico Solar Energy Project. This would have covered almost an entire square mile in Mojave Desert, destroying habitat and risking the future survival of species including the desert tortoise and bighorn sheep.

Perhaps the most important lesson of the catastrophic failure of centralized socialist economic planning in the Soviet Union is that while government is very good at destroying industries, it is not very good at creating new ones that can actually survive under market competition. As the United States prepares to sign the Paris Agreement, it does so having already committed enormous resources to a climate policy that replicates the failure of Soviet central planning. By aiming to replace the use of coal for power while mandating the use of renewables, Obama’s climate policy has surely destroyed coal, but has impeded, rather than helped, investments to replace it.

Jason Scott Johnston is an adjunct scholar at the Cato Institute and Professor of Law at the University of Virginia School of Law.