This Chart Says No: Is Germany Really Going to Double Defense Spending? 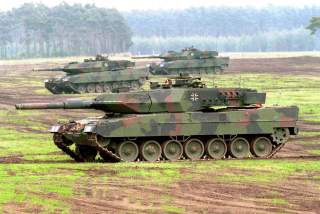 In March, President Trump claimed that Germany owed ‘vast sums of money’ to the US and NATO for failing to meet NATO’s aspirational (but not enforced) defense spending standard of at least 2% of GDP. Just five of the alliance’s members currently spend more than 2% of GDP on defense: the US, the UK, Greece, Poland and Estonia, but no NATO ally has been singled out by the new US administration as much as Germany has.

In fact, German defense spending has been increasing in real terms since 2014–15, when all NATO members agreed to the Wales Summit Declaration. Some commentators have said that the declaration committed Germany to spending 2% of GDP by 2024, but the document’s wording is more subtle:

Allies whose current proportion of GDP spent on defense is below this level will:

– halt any decline in defense expenditure;

– aim to move towards the 2% guideline within a decade with a view to meeting their NATO Capability Targets and filling NATO’s capability shortfalls.

While spending 2% of GDP is still the goal for NATO countries, the Wales Summit Declaration doesn’t commit them to reaching that level by 2024—they only need to increase their spending in real terms over the decade from 2014 to 2024. The agreement’s intent was not to precipitate a rapid increase in defence spending, but rather to reverse the downward trend in NATO countries’ defense budgets, most of which had declined substantially after the end of the Cold War.

To get to 2% of GDP by 2024, Germany would have to double its defense spending in real terms to about €70 billion in the space of just seven years (see the chart here). In 2017, the government’s planned total spending represents roughly 44% of GDP—or about €1.4 trillion. That means defense expenditure in 2017 is budgeted at about 2.6% of total government spending.

Germany could clearly afford to spend more on defense—at the very least, spending more on maintenance and sustainment should probably be a matter of urgency. But the issue is one of guns versus butter: money spent on defense can’t be spent on other things. Doubling defense spending would require the government to substantially increase revenue, decrease spending on other services, or borrow money—and probably a mixture of all three. That would be politically challenging enough, but modern Germans are particularly averse to militarism.

The historical reasons for Germany’s constrained defense spending largely still exist. That it carries responsibility for two world wars is something neither Germany nor its neighbors have forgotten in the ensuing 70 years. A €70 billion defense budget would make Germany the biggest (continental) European military power, and Berlin is well aware that its fellow Europeans are ‘skeptical, even fearful, of a militarily powerful Germany’.

So Germany is in a bit of a bind. Its peaceful reunification and strong economic growth over the last 25 years, combined with recent global events, position it well to take a larger role in European and international security—for which a larger defence budget is likely a prerequisite. But at the same time, Europeans are suddenly remembering why they didn’t want a powerful Germany in the first place. Right on cue, ‘a historical dilemma is relevant again’, unearthing old fears that Germany will use its dominance to assert its own interests.

A determinedly pacifist culture has prevailed in post-war Germany. The German government’s assertion in its 2016 defense white paper (PDF) that the country should forge a more active role in international security and increase its military contributions was a fundamentally new idea ‘in the German political context’ (PDF). But it’s nevertheless taking steps in that direction. By 2024, the Bundeswehr should grow by 20,000 soldiers to 198,000. Germany is involved in the fight against Islamic State, participates in the Mali and Afghanistan missions, and has taken the lead on the ‘enhanced Forward Presence Battalion Battlegroup’ in Lithuania. But it may be difficult for the German government to continue to sell a progressively larger military role in the world.

Defense might be more of a priority if the average German had a greater sense of threat. But Germans are only moderately concerned about Russia, with 32% saying in October 2016 that they were worried about a possible war between Russia and the West. And even if war did break out, only 40% of Germans polled by the Pew Research Center thought Germany should come to the aid of its NATO allies. In a January poll that asked Germans whether they felt safe, 73% responded in the affirmative, and a slim majority of 57% agreed that Germany is well protected from terrorism. A majority still prefer Germany to play a restrained role in international crisis management (though that number has fallen in recent years, from 62% in January 2015 to 53% in October 2016 (PDF)), and only 34%believe defense spending should increase.

Given such low political support for increasing defense spending above current levels, it’d take a monumental change in threat perception for Germans to support a doubling of defense spending. Even the current ambitions may be annulled if Merkel’s Christian Democratic Union loses the upcoming election: her major challenger, Martin Schulz, says that the 2% NATO target ‘most definitely won’t happen’ if he becomes chancellor. At this point, it’s probably safe to say it won’t happen anyway.