Is China About to Declare War Against ISIS? 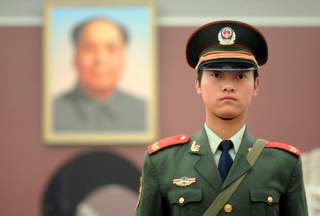 Despite China's long-standing diplomatic principle of non-intervention in the internal affairs of other states, Beijing cannot completely control its citizens' involvement in terrorist activity abroad. Whether China likes it or not, it is being drawn into the conflict against ISIS.

Quoting an unnamed Kurdish security official, a reporter for the Global Times wrote that one militant was killed in Syria in September after becoming disillusioned and trying to return to the Turkish university where he had been a student. The other two were beheaded in December along with 11 other militants from six different nationalities.

In response to the report, a Chinese Foreign Ministry spokesperson simply stated: “China opposes all forms of terrorism. China is willing to strengthen cooperation with the international community to fight together against terrorist forces, including the ‘East Turkestan Islamic Movement (ETIM),’ in order to protect regional and global security and stability.”

This standard statement effectively summarizes the Chinese Government's thinking on counter-terrorism: the emphasis is on the international community's cooperation with China in its fight against the threats of domestic terrorism and separatism (ETIM is an Islamic terrorist organisation founded by Uyghur militants in western China), while China's cooperation with the international community in its fight against international terrorist organizations remains limited.

(Recommended: 4 Reasons ISIS Is a Threat to the U.S. Homeland)

This thinking is frequently expressed in the country's media. Last week, an op-ed in the Global Times put the blame for the execution of a Japanese hostage at the hands of ISIS squarely on Prime Minister Shinzo Abe, arguing that Abe values Japan's relationship with Washington above the safety of its own citizens. It reasons that the execution should serve as a warning to other East Asian nations not to become embroiled in this conflict, and ends by expressing the hope that “from now on, whenever China encounters any kind of terrorist attack, Japanese, US and European public opinion will make a clearer-cut condemnation of those attacks.”

The involvement of Chinese citizens in ISIS is increasingly under scrutiny. Just two weeks ago, Malaysia's Home Minister confirmed that 300 Chinese militants had used his country as a transit point to join ISIS. Three weeks ago,Chinese authorities arrested 10 Turkish nationals for providing false passports to alleged terrorists from Xinjiang.

China will soon be forced to make difficult policy choices with significant implications for its diplomacy and international role. It will no longer be able to make official statements linking Uyghur separatists within its borders to international terrorist organizations without making a tangible contribution to counter-terrorism efforts abroad.