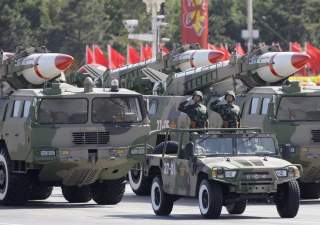 China will soon start rolling out its next-generation rail technology across the country, and it is likely the futuristic trains won’t only have passengers on board.

Christened Fuxing, which means “renaissance” or “rejuvenation” in Mandarin, the bullet trains will be able to cruise at 400 kilometres per hour and will replace the slower Hexie (“harmony”) locomotives on the nation’s sprawling 22,000 km high-speed rail network.

The first two have been shuttling passengers between Beijing and Shanghai since their commercial debut in June 2017, cutting the commuting time from the capital to the coastal economic powerhouse to a little more than three hours.

But it is believed the trains have also been designed for a security role, as they will be capable of rapidly deploying troops, military materiel, weapons and other firepower if the need arises.

Now that almost all counties in the eastern and central provinces and major cities elsewhere have been connected to at least one high-speed rail line, it will be a simple matter to shift reinforcements and supplies, and it will be much quicker than on the choked road system.

Fuxing’s high-speed locomotives carry bigger railcars than those on the old Hexie trains, offering greater logistical flexibility for shipments of troops contingents and bulky equipment. Trains can be shielded more easily from enemy surveillance than trucks and and, unlike airborne troop-carriers, are less vulnerable to inclement weather.

Trains have been used as military transporters for decades, but were first armored and modified to carry missiles, including nuclear warheads, by the Soviet Union.

In the 1980s the communist state devised a heavy purpose-built railcar to hold the RT-23 Molodets intercontinental ballistic missile (ICBM) launch vehicle; Western countries immediately realised the advantage of the railcars: they could be hidden anywhere there was a track.

“As it was impossible to precisely determine the place where they could fire a nuclear missile, they were dubbed as ‘death’ or ‘phantom’ trains,” the Washington-based National Interest reported in its February 2017 issue, citing Russian papers.

The RT-23 was followed by the Molodets BZhRK SS-24 Scalpel and by 2020 the Russian Strategic Rocket Forces are scheduled to take delivery of the latest version, the RS-27 or SS-X-31\32Zh Barguzin BZhRK. Like its predecessors, the RS-27 is a distinct class of launch vehicle for rail-mounted intercontinental ballistic missiles.

Moscow has signaled that it will continue to develop train-launched ICBMs and nukes and China appears to have also realised the benefits of using mobile launchpads instead of fixed silos.

The People’s Liberation Army is reported to have tested a rail-mounted ICBM for the first time in 2015, with a Chinese media article noting the missile train was “a countermove in response to America’s global missile defence system and C-PGS (prompt global strike) program” of hypersonic missiles.

Observers believe that China’s DF-41 solid-fuelled ICBM, which is now hauled around the country on road transports and is capable of carrying 10 nuclear warheads to a range of 15,000 km, is likely to be adapted to a rail platform in the near future.

It is probably no coincidence that Beijing continues to splurge hundreds of billions of dollars to extend heavy high-speed rail lines out to its vast western provinces, where many of the PLA’s ICBM and nuclear assets are located. A new line linking the southwestern city of Xian and Chengdu in Sichuan province was inaugurated last month.