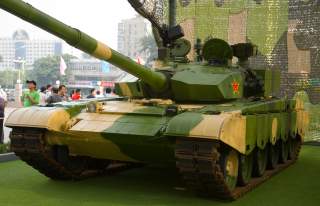 In June 2017, the Chinese periodical Guancha reported that the Xinqingtan (literally “New Light Tank”), a mountain-going tank formerly known by the equally generic appellation ZTQ-105, had entered trials in Tibetan Plateau. The newspaper characterized these as “a show of force designed to deter the Indian military,” while a military spokesman stated on June 29 they were “aimed to test the tank’s performance and are not targeted at any country.”

As defense writer Robert Beckhusen recently observed, new spending in New Delhi to develop an Indian light tank is surely aimed at countering the Xinqingtan. India and China, of course, have been escalating the militarization of their Himalayan border for well over a decade. India is still bitter over China’s close relationship with Pakistan and its defeat by attacking Chinese forces in a border war in 1962, while Beijing still fumes over Indian asylum granted to the Dalai Lama. Troops from the regional powers recently engaged in a tense two-month standoff over Chinese construction through a mountain pass claimed by the country of Bhutan.

Light tanks began to fall out of favor way back in World War II. Romantic notions about light cavalry using their speed to race ahead and outmaneuver foes were dashed when vehicle like the Panzer II or M3 Stuart lost out time and time again when confronted with heavier tanks and fortified strong points due to a lack of firepower.

But light tanks aren’t really meant to win tank battles or fortified sieges. You win by bringing a light tank to a gunfight—somewhere the enemy isn’t prepared to fight tanks at all. In fact, this was a concept the Indian Army had already demonstrated in the Himalayas in 1948 during the first Indo-Pakistani war.

Indian troops were seeking to take back the city of Kargil from Pakistani forces, but first had to seize Zoji La pass—popularly known as the “the Path of Blizzards”—by traversing freezing terrain devoid of cover overlooked by entrenched Pakistani infantry. To make it happen, Indian General Thimayya had Indian sappers haul dismantled M5 Stuart light tanks of the 7th Cavalry from the regional capital of Srinagar to a staging area 11,500 feet above sea level, using a mule track and several fragile bridges with limited maximum weight tolerances. The turretless tank hulls at times had to be literally pushed by foot soldiers up steep inclines.

The under-gunned Stuart had not exactly distinguished itself in World War II. But when dozens of the re-assembled tanks stormed the pass on November 1 as part of a combined arms assault backed by infantry and artillery, the Pakistani troops were shocked to face any armor in such a remote location, and officers were recorded on radio voicing their disbelief at the panicky reports issuing from the frontline. By November 24, the little Stuart tanks had rolled into Kargil.

The People’s Liberation Army had been secretive about the new tank, with early photos emerging in 2011 always featuring the turret swathed in camouflage netting. Later in October 2016, the manufacturer Norinco unveiled an export variant designated the VT-5, from which much of the information on the Xingqingtan has been gleaned—note, however, that it is unclear what distinguishes the VT-5 from the domestic model. Now, Chinese state television is airing footage of the Xinqingtan tanks on maneuvers on the Tibetan plateau.

The Xinqingtan weighs between 33 to 36 tons depending on the armor configuration, whereas contemporary Western or Russian main battle tanks typically tip the scales ranging from 50 to 70 tons. The design apparently is a downsized VT-4 export tank, which traces its lineage back to the Russian T-72. The lighter vehicle can be air dropped by parachute, though it is not amphibious.

The new design’s hull is made of welded steel—nothing special, though at least it’s not flammable lightweight aluminum—and it can fit modular add-on armor, including composite or Explosive Reactive Armor types, either of which might improve survivability versus missiles or rocket propelled grenades. However, at this weight class the Xinqingtan is unlikely to withstand a hit from a modern tank main gun, though it could prove resistant to the automatic cannons widely employed on infantry fighting vehicles.

The Xinqingtan boasts a rear-mounted 1,000 horsepower turbocharged diesel engine giving it an excellent power-to-weight ratio. This enables it to climb on steep inclines and operate at higher altitudes, where the thinner air simply starves out the engines of heavier vehicles. Furthermore, the new light tank uses expensive hydropneumatics suspension which affords a smoother ride and can adjust the ground clearance of the vehicle as necessary, an ideal feature for overcoming craggy or boggy terrain.

The light tank’s primary weapon is a full-stabilized 105-millimeter rifled gun with thirty-eight rounds of ammunitions. It can fire tungsten sabot rounds capable of penetrating an equivalent of 500 millimeter of rolled hardened steel. This is far from adequate for penetrating the frontal armor of contemporary main battle tanks, but possibly enough to defeat older T-72 models. Effective range is only listed as three kilometers, though the gun can also fire anti-tank and helicopter missiles with tandem-charge warheads at targets up to five kilometers away.

The gun barrel reportedly can elevate to very high angles. This could prove useful, as historically, limited gun elevation has often bedeviled tankers in mountainous regions, who have even resorted to improvised ramps to shoot at higher angles. Thanks to an autoloader which ejects spent shells out the rear, the Xinqingtan requires only a crew of three: a gunner, driver and commander.

The vehicle boasts a purportedly sophisticated sensors and fire control system, including thermal sights for both the commander and gunner, a targeting computer linked to a wind sensor and “hunter killer” engagement mode that automatically adjusts the aim to paint enemy vehicles. Other gear includes a laser rangefinder, a GPS navigation system and battle management software allowing to network effectively with friendly vehicles. These are typical design features in modern tanks, but not cheap to include on a disposable vehicle.

In terms of secondary weapons, there is also a remotely controlled 12.7 millimeter machine and a 35mm automatic grenade launcher on top of the turret, plus a co-axial 7.62mm gun inside the turret. This adds up to quite a bit of anti-personnel firepower.

The Xinqingtan is reportedly deployed as part of a PLA integrated brigade in Tibet, which would imply a minimum of one tank battalion of thirty-one to thirty-three tanks, though there could be several battalions. An initial order of 300 tanks is suggested by available sources, a number which implies implies the tanks would occupy a specialized role in the Himalayas or for air-deployment operations, rather than generalized role throughout the PLA. The new vehicles will replace the recently retired Type 62, a design which suffered 50 percent casualties when PLA armor invaded northern Vietnam in a punitive war in 1979.

Guancha characterized the Xinqingtan as “far more advanced” than the Indian T-90S tanks across the border. While it is possible the lighter Chinese vehicle might have more advanced fire control systems, allowing it to hit more accurately at range, the T-90 still far outclasses it in terms of hitting power and armor protection. However, the real danger to the Indian military may be that the Xinqingtan could operate in remote mountain passes and traverse especially rough roads that the T-72s and T-90s simply could not reach at all.

Light tanks have always traded survivability for mobility and access—and sometimes simply getting to remote battlefields where they are most needed and least expected is enough to secure victory, as demonstrated in the history of the Soviet PT-76 amphibious tank and airborne BMD fighting vehicle, and even the U.S. Army’s much criticized M551 Sheridan. While the Sheridan has been retired without a replacement in U.S. service, China and now India still see a useful role for light armor in their ongoing confrontation in the Himalayas.