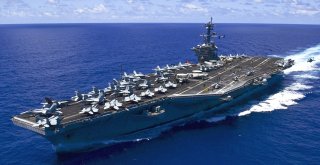 The aircraft-carrier strike group led by USS Carl Vinson conducting naval and air operations in the South China Sea this week is the first challenge to Beijing’s expansive maritime claims to the waters since Donald Trump took office.

The US Navy announced that the operations began on February 18, describing them as “routine,” while Chinese state media quickly called the warships’ freedom-of-navigation activities a threat to China.

A Pentagon official said the naval maneuvers were not freedom-of-navigation but exercises of the kind the US Navy has been doing for a hundred years.

The exercises were ordered by US Defense Secretary James Mattis, who is said to be concerned that a lack of regular US naval and air maneuvers in the sea has undermined regional stability.

The carrier operations put Beijing on notice that the new president likely will continue US policy in seeking to bolster regional allies that have become increasingly alarmed at China’s assertiveness in the region.

China has been creating islands on a number of atolls and rocky outcrops in the sea, and over the past 12 months has begun adding military facilities.

US analysts say the Chinese military buildup in the area has been subtle and gradual, and designed to avoid provoking a direct confrontation with Washington.

For example, naval missile emplacements have been spotted on several of China’s new islands in the Spratly archipelago. The missiles seen in intelligence imagery are assessed to have ranges of less than a mile and thus unlikely to threaten passing US warships. Intelligence analysts at the Pentagon, however, noted that the missile emplacements were built to be interchangeable with much more advanced and long-range anti-ship cruise missiles – weapons that would pose threats to US warship patrols through the waters.

Mattis is a staunch believer in Trump’s “Peace through Strength” policies. Thus he is likely to abandon the previous administration’s policy of seeking to avoid upsetting China. That led to a diminution of freedom-of-navigation operations in the South China Sea and elsewhere.

Mattis made clear in policy questions posed during his confirmation by the US Senate that China’s activities required bolstering regional allies in Southeast Asia.

“China’s behavior has led countries in the region to look for stronger US leadership,” he stated, adding that once in office he would seek to strengthen alliances and review US military capabilities in the region.

“We must continue to defend our interests there – interests that include upholding international legal rights to freedom of navigation and overflight,” he added.

Mattis said upholding freedom of navigation and overflight was “vital to the defense of our other national-security interests” – a blunt and direct statement of the strong US commitment to preventing any attempt to turn the South China Sea into a Chinese lake.

Secretary of State Rex Tillerson also weighed in on the dispute, promising during his confirmation that the United States would block China from further militarizing the islands.

In addition to the Vinson and its warplanes, the guided-missile destroyer USS Meyer is taking part in the South China Sea operations. Strike aircraft that will be flying over the sea include F/A-18 Super Hornet jets, helicopters, and electronic-warfare jets.

Before entering the sea, the ships conducted training off Hawaii and Guam to improve their military capabilities and “develop cohesion as a strike group,” the US Navy said in a statement.

“The training completed over the past few weeks has really brought the team together and improved our effectiveness and readiness as a strike group,” said Rear Admiral James Kilby, the strike-group commander. “We are looking forward to demonstrating those capabilities while building upon existing strong relationships with our allies, partners and friends in the Indo-Asia-Pacific region.”

Last week, China’s Foreign Ministry warned the United States against challenging its claims to the waters.

On Sunday, Global Times, an often strident mouthpiece of China’s Communist Party,  said “The deployment of the US aircraft carrier USS Carl Vinson to the South China Sea on Saturday is a military threat to China.” However, the usually over-the-top anti-US rhetoric of the paper was absent from the recent article. Instead of calling the exercises an act of war or other hostile action, the newspaper stated only that the naval maneuvers would increase the risk of unspecified “interference.”

Retired US Navy Captain Jim Fanell said the carrier deployment was a routine occurrence in the post-World War II US Pacific Fleet.

“Likewise, this carrier strike group’s operations in the South China Sea is neither unprecedented or provocative,” Fanell said. “Quite to the contrary, and despite protests from Beijing, it is encouraging to see the new US administration physically demonstrate America’s continued commitment to the principle of freedom of navigation in international waters.”