China Has a Devastating 'Debt Time Bomb' on Its Hands 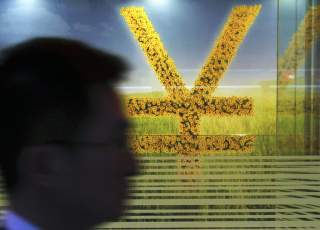 In reality, of course, those two words are probably enough for the mandarins in the rarefied atmosphere at the People’s Bank of China to break out in a collective cold sweat.

With a broader brief to exert control over financial regulatory policy-making, the de facto central bank has been handed increased powers to deal with the threat of increased risk bubbling beneath the surface of the world’s second-largest economy.

At the same time, the PBOC has a new governor in Yi Gang after his appointment to succeed old boss Zhou Xiaochuan was approved at the National People’s Congress in Beijing last month.

Near the top of his agenda, as he settles into his plush leather chair, will be tackling China’s growing debt crisis.

“Yi will work to defuse the debt bomb lurking [in] a series of alarming statistics concerning the Chinese economy,” Hui Feng, a senior research fellow at the Griffith Asia Institute, said.

“China’s total debt has almost doubled between 2008 and mid-2017, to 256% of GDP [gross domestic product] as the economy slowed down from double-digit growth to a mere 6%,” he added in an article for The Conversation.

Part of the problem resides in the shadow banking sector, a report released last month by the Financial Stability Board, an international organization which monitors the financial system, pointed out.

Based in the Swiss city of Basel, the FSB found that about 15%, or roughly US$7 trillion, of the world’s riskier non-bank loans were held in China. Linked to the supply of credit, these loans could pose ‘systemic risk’, the survey highlighted.

Since the 2008 financial crisis, regulators have tightened oversight of the sector after borrowing outside the traditional banking system allowed excessive risk-taking to build up, threatening the stability of the global economy.

“Market-based finance provides increasingly critical alternatives to bank lending in the financing of economic growth, and it is vital that resilience of the sector is maintained as it continues to evolve,” Mark Carney, the chairman of the FSB and the governor of the Bank of England, said in a statement.

Yet before the ink had barely dried on this latest report, alarm bells had already started ringing in Beijing. Back in February, the Anbang Insurance Group was taken over by the government in an unprecedented move by China amid fears it was on the verge of collapse.

During the previous three years, the company had gone on a whirlwind, worldwide spending spree after gorging on cheap credit.

In 2015, the Beijing-based behemoth bought the iconic Waldorf Astoria in New York for nearly $2 billion and later made a $6.5 billion move for Strategic Hotels and Resorts.

“The decision had huge significance,” Hu Xingdou, an economist at the Beijing Institute of Technology, said at the time. “If something went wrong with Anbang it would lead to massive bad loans in the financial system.”

By beefing up regulations and calling for greater “transparency” in the industry, Beijing is now sending out a strong signal that it will finally get to grips with corporate and domestic-fueled debt, the state-owned Xinhua News Agency stated.

“[We must] adopt unified regulatory standards on types of asset management products, practice fair market access and supervision, and eliminate regulatory arbitrage to the maximum extent to promote the industry’s development,” the official organ of China’s ruling Communist Party reported last Friday when announcing the news.

Overseeing this massive clean-up campaign will be the new Vice-Premier Liu He, a confidant of President Xi.

He will run economic policy and work closely with Yi at the PBOC and Guo Shuqing, the chairman of the China Banking and Insurance Regulatory Commission, to improve corporate governance and control risk management.

“To win the battle against financial risk [has to be a] priority for the country,” Liu told Xinhua.

The 84-minute film, which has shades of Alex Gibney’s Enron: The Smartest Guys in the Room, shows how certain China-based companies have allegedly bilked Western investors out of billions of dollars through fraudulent accounting.

By using a complex web of financial instruments shrouded in smoke and reflected through a wall of mirrors, the movie is billed as another wake-up call for the financial sector.

It will also make grim viewing for Liu, Yi and Shuqing, illustrating the threat of lax accounting procedures, regulatory loopholes and excessive debt. In turn, this has driven unsustainable corporate expansion inflamed by a Wild West-style shadow banking sector.

Left unchecked, the fallout could resemble the carnage of 2008, which deepened into the Great Recession less than eight years ago.

“A distressed financial system [is likely to] trigger a systemic economic collapse,” Hui at the Griffith Asia Institute warned. “To rein in this possibility, Yi will have to work closely with authorities in the State Council, China’s cabinet, to contain the risks.”

Only by rewriting this real-life script will Beijing avoid a film noir-inspired, cliff-hanging final scene and prevent a global outbreak of the ‘cold sweats.’