China Has a Plan to Turn Old Planes into Stealth Fighters 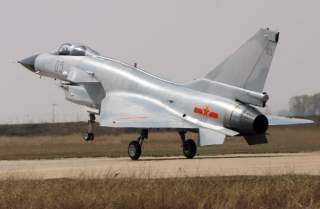 Chinese researchers are hard at work on an “invisibility cloak” that could turn older jets into stealth planes.

The “cloak” consists of a coating of metamaterial, which is made up of microscopic structures that can bend light or electromagnetic radiation to help planes evade radar.

According to the South China Morning Post, a research team from the Southeast University State Key Laboratory of Millimeter Waves is currently testing the metamaterial on aircraft at a military production facility in Shenyang, Liaoning province.

In recent years, China has invested heavily in metamaterials and the Southeast University laboratory has made several major breakthroughs—including the first-ever programmable metamaterials that can alter their physical properties with electricity.

But China is not alone in pursuing this technology. The United States and other Western countries have been actively studying metamaterials for over a decade for both commercial and military use.

In 2011, a scientist at the University of Birmingham in the United Kingdom successfully turned a paper clip invisible by using crystals to redirect visible light around itself to avoid reflection. Meanwhile a team from Purdue University created a metamaterial in 2010 that absorbs electromagnetic radiation to make an object nearly invisible to radar.

It is unclear exactly what technology or capabilities Chinese researchers are testing on military aircraft. But in the past, a team from the Southeast University laboratory, led by Professor Cui Tiejun, announced that it had created a device that would make it undetectable along the three of the most common radio bandwidths that military radars use.

More recently, Professor Cui’s team said it had developed a “ghost illusion device” that could make a plane virtually undetectable by radar. The device is reportedly even capable of fooling radar into reading parts of the plane as plastic rather than metal or showing multiple planes instead of one.

Regardless of the specific capabilities, applying metamaterials to China’s fleet of 1,700 military aircraft could give them a much needed upgrade. Aside from a handful of J-20s—the world’s only fifth-generation stealth fighter other than the U.S.-made F-22—much of China’s fleet consists of aging Russian aircraft and their reverse-engineered domestic versions.

But making a stealth airplane requires more than just a coat of metamaterials.

While older Chinese planes won’t be receiving a stealth cloak any time soon, metamaterials could be used in sensitive components to improve communications, sensors and jamming.

Last month, Chinese state media claimed that a lab was producing over 100,000 square feet of metamaterials a year, largely for the J-20 fighter.

Peter Singer, a strategist and senior fellow at the New America Foundation, believes that the materials will be used to enhance the J-20’s absorbers and antennas. Metamaterials can be fine-tuned to specifically absorb or reflect certain wavelengths, giving equipment a powerful boost.

“Metamaterial antennas can increase radiated power, resulting in longer-range and more precise radar, as well as powerful jammers and datalinks,” Singer explained. “Additionally, metamaterials optimized for infrared radiation can improve the sensitivity of the J-20's infrared sensors for tracking missiles and aircraft.”

Meanwhile, metamaterials specially designed to absorb radar frequencies could be applied to areas likely to reflect radar waves back to enemy aircraft—such as weapon bay doors and engine nozzles.

It remains to be seen whether China’s claims about its metamaterials breakthroughs and production capabilities are accurate. But one thing is clear: given their impressive capabilities, metamaterials will likely be a critical component in the future of military aviation.