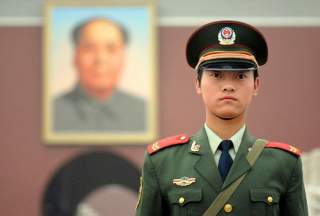 China convicted a U.S. businesswoman of espionage Tuesday, sentencing her to three and a half years in prison.

Phan Phan-Gillis, a naturalized U.S. citizens and Texas resident who goes by the name Sandy, was detained two years ago for crimes that allegedly took place over two decades ago.

A Chinese court ruled that Phan-Gillis was guilty as charged at a secret trial held in Nanning, Guangxi. The judge ordered that she be expelled from the country. It is unclear whether she will be deported before or after she serves her sentence, due to the complexities of Chinese laws and the application of the law to foreign nationals, reports the New York Times.

Phan-Gillis allegedly recruited people in the U.S. to work for a foreign spy organization dedicated to stealing Chinese secrets, according to Chinese authorities. She was also said to have engaged in espionage in Guangxi province in Southern China in the 1990s, despite evidence that she may not have been in the country at the time.

The highest penalty for espionage is the death penalty.

She was detained during a 2015 business trip. Phan-Gillis initially confessed to the crimes of which she stood accused, but she later retracted her confession, claiming that it was made under duress. The United Nations has criticized the detainment of Phan-Gillis, and the U.S. has pressed China repeatedly for her release.

She was indicted last July and forced to stand trial in September.

Jeff Gillis, the woman’s husband, insists his wife is innocent, pointing to the fact that Phan-Gillis’ passport shows that she was not in China in 1996, when she was supposedly carrying out anti-state espionage activities. He testified before Congress in March, revealing that his wife had endured two years of physical and mental torture, solitary confinement, and wrongful imprisonment.

He said he feared his wife would die in a Chinese prison. He said the charges against his wife are “beyond ridiculous.”

At the trial, Phan-Gillis plead guilty to engaging in “activities harmful to Chinese national security.” The judge sentenced her to several years in jail, but there may be good news.

Under the provisions of Chinese law, Phan-Gillis could be eligible for parole and deportation, John Kamm, founder of the San Francisco-based Dui Hua Foundation, told the Guardian. “She’s supposed to serve the sentence in China,” Shang Baojun, Phan-Gillis’ lawyer told reporters. “But maybe there’s a condition based on which she can be deported to the U.S. before the imprisonment.”

“We hope she can return to the U.S. as soon as possible,” he added.

Kamm credited the Trump administration, which has sought to develop a positive U.S.-China bilateral relationship.

Secretary of State Rex Tillerson is believed to have argued on behalf of Phan-Gillis during his recent visit to Beijing. “If U.S.-China relations were not going as well as they are right now, I think this outcome would have been different,” Kamm told reporters.

A written verdict, which could take several days to come out, will reveal Phan-Gillis’ fate.