China Is Landing Bombers All Over the South China Sea 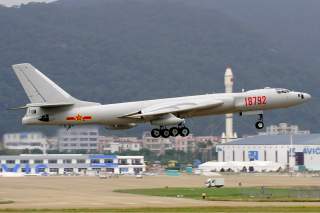 The Chinese air force has landed bombers on islands and reefs in the South China Sea, Iran Press TV reported on Sunday.

According to official statements, it’s all part of a training exercise but other countries in the region see it as another show of force by Beijing.

The Chinese air force said in a statement issued on Sunday (May 20) that “a division of the People’s Liberation Army Air Force recently organized multiple bombers such as the HK-6K to conduct takeoff and landing training on the islands and reefs in the South China Sea in order to improve our ability to reach all territory, conduct strikes at any time and strike in all directions.”

The statement, which appeared on the Chinese Air Force’s Weibo blogging account, did not mention exactly where in the South China Sea the training has taken place.

Beijing has always claimed that its newly established military facilities on artificial islands built by the Chinese are purely defensive.

Iran Press TV went on to quote in its report the Pentagon’s spokesman Lt-Colonel Christopher Logan as saying that “China’s continued militarization of disputed features in the South China Sea only serves to raise tensions and destabilize the region.”

The US has regularly dispatched warships to the South China Sea in a bid to challenge Beijing’s sovereignty claims while China has criticized the US for its military presence in the region. China reportedly suspects that US naval drills in the area are part of efforts to contain Beijing’s growing influence in this and other maritime regions.

Islands and reefs in the South China Sea are claimed in whole or in part of China, Vietnam, Taiwan, Malaysia and the Philippines.

Philippine President Rodrigo Duterte has been softer on China than his predecessors.

But when earlier this month Chinese tourists arrived in Vietnam wearing t-shirts featuring a map of China — including the disputed islands — there was an angry backlash on social media and the t-shirts were confiscated, showing that not every country in the region is willing to accept China’s territorial claims.

This article by Bertil Lintner originally appeared on Asia Times.