China May Have Tested a Ballistic Missile That Could Target Taiwan, Report States 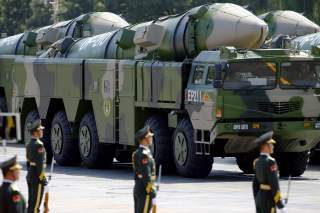 China may have recently tested a ballistic missile that is said to target Taiwan.

This week, the Hong Kong–based South China Morning Post reported that the Chinese military’s official newspaper had posted images and a video of what appeared to be a test of the DF-16 or its predecessor missile, the DF-11. The People’s Liberation Army Daily, which is the name of the military paper, did not specify when the tests had been carried out.

“The missiles appeared to be either Type DF-11 or DF-16 mobile-launched missiles with ranges of between 600 km and 1,000 km, according to a Chinese military observer,” the South China Morning Post (SCMP) reported. However, the photos that the SCMP republished all appeared to be of the less advanced DF-11.

Both the DF-11 and DF-16 are short-range surface-to-surface missiles. According to Jeffrey Lin and P.W. Singer, the DF-11 has a range of between 500 km and 700 km. More importantly, the most advanced DF-11 short-range ballistic missile (SRBM) only has an accuracy of about thirty meters, while older versions were somewhere near 200 meters. That means that 50 percent of the missiles would fall within that distance of their targets.

By contrast, the DF-16 is much larger, more powerful and more lethal. For instance, while the DF-11 is carried by a four-axis transport erector launch (TEL) vehicle, the DF-16 is carried out by a five-axis one. It also has a range of around 1,000 while carrying a 500 kg – 1000 kg warhead. Perhaps most importantly, it has an accuracy of as little as five meters. Some sources claim that the DF-16 can maneuver during its terminal phase to evade missile defenses and also hit slow-moving targets. As Lin and Singer put it, “The DF-16's high accuracy, rapid flight time and its large 500 kg – 1000 kg warhead would allow it to target moving enemy targets, such as ships, missile TEL vehicles and leadership convoys.”

The DF-16 was first displayed in September 2015 during a parade held to commemorate the seventieth anniversary of Japan's defeat in the Second World War. The YJ-12 antiship cruise missile was also shown publicly for the first time during the same event. Overall, the DF-16 has been seen on at least three occasions. Although it is unclear why SCMP believes the most recent tests included the DF-16, the missile has been tested in the past and is said to be already deployed. Ultimately, the DF-16 is expected to replace China’s older DF-11 and DF-15 missiles. About a year ago, Mark Stokes of the excellent Project 2049 think tank estimated that at that time China probably already had at least a dozen of the missiles.

With its 1,000 km range, the DF-16 could threaten many targets in the region—from India to the Korean Peninsula to U.S. bases in Okinawa in Japan—depending on where it is deployed in China. Initially, the DF-16 missile was deployed in the northern part of Guangdong province, cementing the impression that the missile’s primary target is Taiwan. “The DF-16 system appears to be most applicable in the event of use of force against Taiwan,” Stokes told Forbes magazine in February of last year. “[That] includes strikes against air defenses, runways, and unhardened command and control facilities.”

The following month, March 2017, Taiwan’s defense minister, Feng Shih-kuan, confirmed that the DF-16 was deployed against his nation. Feng also claimed that contrary to media reports, Taiwan’s U.S.-supplied Patriot-3 missile defense systems were capable of dealing with the DF-16 given Taipei's advanced surveillance systems. This claim is probably questionable at best, assuming the DF-16 does maneuver late in flight.

China appears to have decided to step up its intimidation of Taiwan in recent years. One example of this is Beijing’s frequent bomber flights over the island. An analysis that appeared in War on the Rocks in September of last year noted, “After conducting two strategic bomber flights around Taiwan in late 2016, Beijing in the last two months has significantly stepped up its operational tempo with at least another five flights circumnavigating the island.” These flights have continued since that article was published, with numerous ones in December and November. More recently, China unilaterally opened new civilian aviation routes over the Taiwan Strait in violation of a prior bilateral agreement between Taipei and Beijing.

The stepped up intimidation of Taiwan may have to do with Tsai Ing-wen’s election as president in 2016. Tsai is a member of the Democratic Progressive Party (DPP), which Beijing believes is pro-independence for Taiwan. China’s renewed pressure could also be attributable to Xi Jinping’s growing power and inclination to pursue a more muscular foreign policy. This has resulted in Taiwan bolstering its own defenses. According to recent media reports, Taipei plans to increase military spending by 20 percent by 2025.

The DF-16 is not the only (relatively) new missile that the United States and its allies must worry about. As my former colleague at The Diplomat, Ankit Panda, first reported last month, China recently tested a new ballistic missile, the DF-17, that has a hypersonic glide vehicle (HGV). In his report, Ankit noted that “parts of the U.S. intelligence community assess that the DF-17 is heavily based on the PLARF’s DF-16B short-range ballistic missile, which is already deployed.”