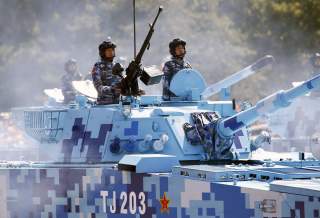 If Chinese leaders thought that saying goodbye to their least favorite US military commander, current US Pacific Command chief Admiral Harry Harris, would mean a more amenable replacement is on the way, they had better guess again.

The nominee to take the spot when Harris becomes ambassador to Australia is sounding the alarm bells about China’s operations in the South China Sea, calling for the US to maintain a strong presence in the region and step up advanced weapons development.

“In short,” he wrote, “China is now capable of controlling the South China Sea in all scenarios short of war with the United States.”

“Once occupied, China will be able to extend its influence thousands of miles to the south and project power deep into Oceania,” Davidson said of forward operating bases that have already been completed. “The PLA will be able to use these bases to challenge US presence in the region, and any forces deployed to the islands would easily overwhelm the military forces of any other South China Sea-claimants.”

News Corp Australia noted the admiral’s statements on Sunday in the context of the news that Australian warships had been “challenged” in the waters. The meeting of the two navies was downplayed by the Australian Navy, but hyped in the media as a sign of China’s growing assertiveness. Chinese state media took offense.

“If Australia considers exchanges between countries as interference, it should lock itself up in the dark room,” China’s Global Times quoted the Chinese foreign ministry as saying about what has been described as a “standoff” between the Chinese and Australian ships.

“People who have such a mindset need to reflect,” foreign ministry spokesman Hua Chunying was quoted as saying.

“If there is no mutual trust, there’s no room for co-operation. China hopes Australia takes practical action and corrects its prejudice against China.”

“US operations in the South China Sea—to include freedom of navigation operations—must remain regular and routine. In my view, any decrease in air or maritime presence would likely reinvigorate PRC expansion.”