China In Race To Overtake U.S. Military in AI Warfare 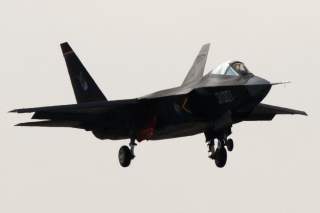 During the meeting, the Chinese leader was photographed at the PLA Academy of Military Sciences shaking hands with Major General Li Deyi, a leading authority on artificial intelligence, or AI, and a key figure in the Chinese military’s effort to overtake the United States in the emerging field of advanced weapons.

The meeting between Xi and the military experts garnered little public attention.

But within US intelligence agencies closely monitoring rival China, the attention given by Xi to Li was the latest sign of the growing importance Beijing places on rapidly building autonomous weapons – robotic arms capable of thinking and acting at the speed of light.

The Chinese military quest for integrating AI into its tanks, naval forces and aircraft is the part of China’s asymmetric or “assassin’s mace” warfare strategy – building high-technology arms that will enable China’s weaker forces to defeat the more powerful military of the United States in any future conflict.

Two years ago Xi spoke to the Central Military Commission and called on it to move ahead with fusing advanced technologies like big data, cloud computing and AI for the Communist Party’s People’s Liberation Army.

“China’s breakthroughs in AI can be expected to enable future unmanned combat aircraft (UCAV) that are more responsive than human-controlled aircraft, better able to counter large formations of enemy UCAVs, as well as enable new energy weapon-equipped space combat platforms that will have to prevail over US and other space combat systems,” said Rick Fisher, a China military affairs expert.

“China can also be expected to use AI to enable very deep sea unmanned underwater combat vehicles (UUCVs) able to contest control over the ocean floor, where China will want to defend very large sensor grids of its Underwater Great Wall.”

For China’s large and varied missile arsenal, AI has a future as well. Wang Changqing, a Chinese weapons designer, said future cruise missiles “will have a very high level of AI and automation. They will allow commanders to control them in a real-time manner, or to use a fire-and-forget mode, or even to add more tasks to in-flight missiles.”

China’s application of AI to its growing cyber warfare capabilities also will increase the danger posed by cyber attacks and espionage.

“The implications of our adversaries’ abilities to use AI are potentially profound and broad,” US Director of National Intelligence Dan Coats said in February. “They include an increased vulnerability to cyber attack, difficulty in ascertaining attribution, facilitation of advances in foreign weapon and intelligence systems, the risk of accidents and related liability issues and unemployment.”

China’s advanced AI-powered arms are among Beijing’s most closely guarded secrets. Little is known about how far along China’s military has developed these AI-powered weapons that include autonomous tanks and land vehicles, submarines and surface warships as well as bombers, fighters and drone aircraft.

China recently demonstrated the use of an unmanned tank and showed off a swarm of drone aircraft as part of its AI military program.

Some elements of the AI drive can be gleaned from Chinese writings, although analysts warn China is known to use such public writings, especially on military affairs, to deceive foreign spy services into misestimating its military programs.

One recent article in the PLA’s official newspaper provided a wealth of details on China’s AI warfare plans. AI warfare will be conducted under the rubric of “intelligent operations,” the article’s authors, Shen Shoulin and Zhang Guoning, said.

China plans to attack enemy perceptions, understanding and reasoning by “taking the cognitive initiative and damaging or interfering with the cognition of the enemy based on the speed and quality of the cognitive confrontation.”

Achieving supremacy over enemies in the information space will be decisive. “Once intelligence supremacy is lost, supremacy of other spaces is meaningless,” they said.

According to Shen and Zhang, the goal will be to “make the opponent unable to perceive, or perceive garbage information and false information, and make sure its own side can accurately and quickly perceive the opponent and the battlefield.”

On the influence front, AI attacks will “disrupt and destroy” enemy morale and thinking “by interfering with brain function and affecting people’s ideology, value judgment, psychological emotion, and the like,” they stated.

The combined elements will guide military operations by producing intelligence analyses and battle plans for both troops and unmanned systems that will then conduct rapid and accurate attacks on targets.

The authors argue that humans will remain dominant in intelligent warfare, but the melding of humans and machines will help overcome what the authors say are brain shortcomings such as fatigue, forgetfulness and emotion.

AI machines will not get tired, forget or have moods and will reliably boost both speed and high accuracy.

Commanders will continue to make high-level decisions and overall planning. Robot systems will be used for memory, calculation and management tasks based on masses of data and their ability to digest data at high speeds.

The Chinese believe AI weaponry will learn rapidly from the battlefield “like a human recruit growing into a battle-hardened veteran,” Shen and Zhang wrote.

A recent report done for a US Congress commission on China by the analytical firm Jane’s HIS Markit warns that China may well surpass the United States in the field of AI.

The report argued that the Chinese military plans to use AI for conducting Fifth Generation Warfare – emerging irregular warfare “that is increasingly unconstrained in both the means used to attack or influence adversaries and the targets selected for attack.”

“Autonomous and swarmed unmanned vehicles have the potential to,” as one engineer who supported China Electronic Technology Group Corp’s June 2017 record-setting test of a swarm of 119 drones noted, “become a disruptive force in military operations that will change the rules of the game,” the Jane’s report said.

“Looking forward, the PLA’s militarization of AI will influence the trajectory of this unfolding military revolution, presenting a unique strategic challenge to the United States,” Kania wrote in a recent paper.

US Defense Secretary Jim Mattis said the Pentagon is investing in advanced arms technologies to deal with China, including advanced autonomous systems and artificial intelligence.

“We will prioritize rebuilding readiness while modernizing our existing force,” Mattis said in February.