China Reacts to Obama's State of the Union: America is in Decline 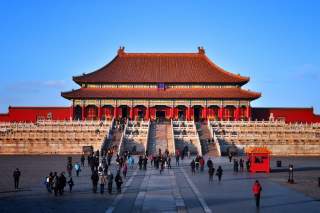 In his State of the Union address on Wednesday, President Obama mentioned China a total of three times.

One was to praise China's commitment to cut carbon emissions. The second was to encourage American manufacturing executives to bring back jobs from China. The third was a call-to-arms to prevent China from writing the trade rules in the Asia Pacific.

China watchers inhaled sharply at this third point, given the sensitivity in China about who should be calling the shots in Asia. However, the media coverage in China of Obama's remarks has been surprisingly restrained, suggesting that the leadership does not want to encourage anti-American nationalist fervour at the moment.

The language and tone also reiterates China's view of the US role in the world, its own place in the world order, and how both might change in the future.

The People's Daily ran subdued coverage of Obama's speech, and today, except for a factual article in Xinhua's Chinese language paper, Chinese media made no mention of it at all. The English version ran a piece which focused on Obama's vow to rebuild the economy to help the middle class, but it did not mention anything about who should be writing the rules in the region, or the Sino-US relationship. A Chinese language version of the same article appeared in Thursday's China Daily's business section.

Yesterday's Chinese-language People's Daily noted there was a: “deep meaning” behind China being mentioned three times, and argued that Obama emphasized the competitive nature of the Sino-US relationship. The article called on the expertize of Sun Zhe, Director of the US-China Relations Research Center at Tsinghua University, who said that although Obama did not directly discuss the Sino-US relationship, he implied that China should comply with what he described as US (note, not international) rules in the global marketplace. Sun Zhe concluded that overall, Sino-US relations will continue to grow in 2015.

Coverage of Obama's address in the English version of the People's Daily was limited to how Obama was positioning himself in domestic politics.

Both the English and Chinese versions of the Global Times ran more incendiary coverage of Obama's speech. “The US still wants to dominate the world. They worry that China's fast development will challenge the status of the US,” according to Zha Xiaogang, a Research Fellow at the Shanghai Institute for International Studies. The article also said China was not the only country to be “irked” by Obama's address, and quoted Russian Foreign Minister Sergei Lavrov as saying that the speech shows that at the center of the (US) philosophy is one only thing: "We are number one and everyone else has to recognize that.” In addition to describing the US as a self-centered hegemon, the article reminded readers that China operates differently, wanting only for “all parties to work together to create a fair, open and transparent environment for economic cooperation as well as to contribute to the improvement of world trade rules” (Foreign Ministry spokeswoman Hua Chunying).

In another Global Times article, Renmin University School of International Relations Deputy Dean Jin Canrong drew on the popular discourse that the US has been in decline since the global financial crisis and argued that while the US may be worried that the world's rules are being redesigned by new powers, it can no longer rely on its own strength alone to manage global issues. The article also noted that Obama's address highlighted the complexity of the Sino-US relationship, since it referred to China in both positive and negative ways.

Taken together, the Government-aligned media coverage in China of Obama's 2015 State of the Union suggests two things.

Firstly, it would seem that at this juncture, the Chinese leadership does not want to stir up nationalist anti-US sentiment. This may imply that the Government wants to pursue engagement and discussion with the US in the near future, and wishes to create the public policy space in which to do so.

Second and relatedly, this should not be misread as any shift in China's fundamental beliefs about what the world should look like and what roles the US and China should play. The overall narrative still paints a picture of a US naturally and inherently inclined to hegemony and unilateralism, but in inevitable decline; and China as a fair, impartial and constructive global player, doing its best in a system it didn't create, and which in time will have to adjust to the rise of new global powers with different (but not threatening) views of how the world should work.

This article first appeared in the Lowy Interpreter here.