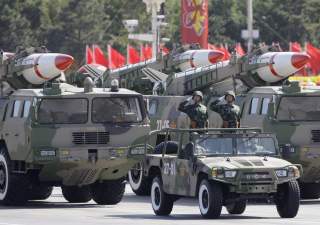 Qatar revealed the missiles and accompanying launch systems during its 2017 National Day parade on December 18. During the parade, Qatari forces showed what appeared to be two Chinese-made SY-400 SRBMs, carried on eight-axle transporter-erector-launchers. Qatar didn’t draw attention to the missiles during the parade, and the first person to point them out on social media seems to have been Joseph Dempsey, a research associate at the International Institute for Strategic Studies (IISS).

Although each pod can carry four SY-400 missiles, images suggested that Qatar’s had been configured to hold a single BP-12A missile, according to analysts, including Dempsey. Since unveiling the system in 2008, China has consistently marketed the SY-400 system for export markets, comparing it to Russia’s Iskander-E. During a 2012 international arms show, officials from the China National Precision Machinery Import and Export Corporation (CPMIEC) said the BP-12A is capable of carrying a 480-kilogram warhead to ranges up to 280 kilometers. This is notable because the Missile Technology Control Regime (MTCR) places its strongest restrictions on exports of missiles that can carry a five-hundred-kilogram warhead for three hundred kilometers.

Qatar’s new ballistic missiles did not go unnoticed in Saudi Arabia, which is currently embroiled in a dispute with Doha. Al Arabiya, a Saudi media outlet, promptly ran an article denouncing the deal and Qatar’s intentions. The article claimed, incorrectly, that the systems have ranges of four hundred kilometers, “meaning that they are capable of striking targets in Manama, Abu Dhabi, Dubai and Riyadh.” It also quoted Matthew Hedges, a PhD candidate at Durham University, who also serves as an advisor to Gulf State Analytics, a DC-based risk consultancy firm, as saying, “The official unveiling of the offensively modified SY400 system with the longer range BP-12A launchers illustrates a highly aggressive move on behalf of Doha.”

Theodore Karasik, who is also an advisor at Gulf State Analytics, says in the Al Arabiya article that Qatar and China began negotiating the deal for the SY-400 missile in 2014, after a number of Gulf states withdrew their ambassadors from Doha. As with the current dispute between the Qatar and other Arab states led by Saudi Arabia, the 2014 rift was over claims that Qatar’s foreign policy was too supportive of Iran and nonstate actors like the Muslim Brotherhood. Karasik is also quoted in the article as saying that “Qatar’s under the table dealings with China illustrates again that Doha is not to be trusted.”

Of course, this is hardly the first time that China has secretly sold ballistic missiles to a Middle Eastern country. In fact, Saudi Arabia has been the recipient of a number of previous covert missile deals with the Chinese. In the late 1980s, for instance, Saudi Arabia clandestinely purchased DF-3 missiles from China, which the United States harshly criticized because of fears that Saudi Arabia would use the missiles as a nuclear weapon delivery system. Then, in 2014, Newsweek reported that in 2007 China had secretly sold Saudi Arabia the more powerful DF-21 ballistic missile. The DF-21 has a shorter range than the DF-3s that Riyadh purchased in the 1980s, but it is believed to have greater accuracy, making it far more useful for conventional strikes. Regardless, the DF-21’s range of around 1,500 kilometers places it well above the category 1 restrictions of the MTCR. In contrast to the DF-3 deal, the CIA secretly sanctioned Saudi Arabia’s purchase of DF-21s.

For the most part, China has tried to straddle the fence on Qatar’s dispute with the Gulf Cooperation Council. As a major energy importer, Beijing has important interests in the Gulf. In fact, since 2004 it has been engaged in negotiations for a free-trade agreement with the entire GCC, which includes Qatar. The current dispute has reportedly put those talks on hold.

Beijing also has important and growing ties with Qatar in particular. News reports have said that bilateral trade between Beijing and Doha tripled to $11.5 billion between 2008 and 2013. Notably, last year Qatar accounted for 19 percent of China’s liquefied-natural-gas imports. That made Doha China’s second largest LNG supplier behind Australia. Furthermore, the CIA estimates that in 2015 China was Qatar’s single largest trade partner, although other organizations like the European Union say other countries like Japan and South Korea engage in more trade with Qatar than China.

Still, China’s interest in selling Qatar ballistic missiles is probably less about any strategic ties and more about Beijing’s broader desire to increase its arms exports. From 2012 to 2016, China grew its share of global arms sales to 6.2 percent from 3.8 percent during 2007 to 2011, according to data compiled by the Stockholm International Peace Research Institute. While this still puts China far behind the United States and Russia in total volume, it was by far the largest increase of any of the top fifteen arms exporters.

Nonetheless, the sale of the SY-400 missiles underscores the necessity of including China in any multilateral effort to slow the proliferation of ballistic missiles in the Middle East, as Henry Sokolski and Will Tobey recently proposed in an article on the National Interest.

Image: Missiles in a parade to celebrate the sixtieth anniversary of the People's Republic of China, October 1, 2009. Reuters/Jason Lee