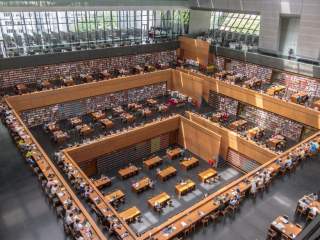 For years, governments and foundations have used scholarships as instruments of diplomacy. The Brits have Rhodes and Chevening, the Americans have Marshall and Fulbright, and the Australian government has created a lot of goodwill in its neighbourhood through the New Colombo Plan.

The logic is simple. Scholarships are a cost-effective way of cementing relationships and creating goodwill among future leaders.

The new battleground is China. The Rhodes Trust has just recruited its first batch of scholars from mainland China, and billionaire private equity investor and the chairman of Blackstone Group Stephen Schwarzman has endowed a college at China's prestigious Tsinghua University and a scholarship program under his name. The inaugural class of Schwarzman scholars are expected to begin their studies at Tsinghua this year.

Beijing is also keen to build its soft power through scholarship programs. President Xi Jinping announced recently that China would award 10,000 scholarships to students from countries included China's ambitious One Belt and One Road initiative, which aims to connect China with developing countries in Southeast Asia and Central Asia through a vast infrastructure building program.

China is already enjoying some successes in attracting future elites to its campuses. You can spot offspring of North Korean senior cadres on the campus of Peking University through their Kim Jong-un pins and slick polo shirts. Some African kleptocrats like to send their kids to Beijing to study. Even Singapore's official class, which is incredibly brand-conscious when it comes to universities, is taking a shining to Beijing—some Singaporean government scholars with degrees from Oxbridge are going to Peking University instead of the Harvard Kennedy School for their further education.

Beijing is particularly attractive to students from developing countries. In fact, the Chinese government is already enjoying some successes from its previous effort to court future leaders from the developing world. Ethiopian President Mulatu Teshome is one such example. Teshome studied in China for twelve years and graduated with a BA, MA and PhD in philosophy from Peking University, where he was a schoolmate of Chinese premier Li Keqiang, who studied law and economics there. The former president of Ethiopia, Negasso Gidada, reportedly said Teshome's Chinese education played a role in informing the country's reform policy. At present, China is Ethiopia's largest investor as well as trading partner.

Another example is Kazakhstan, where in recent years, Chinese state-owned energy giants have invested heavily. As China pushes for greater influence in the region, it is keen to cultivate local elites through generous scholarship programs. The prime minister of Kazakhstan, Karim Massimov, studied at Beijing Language Institute as well as the law faculty at Wuhan University. He is fluent in Chinese and widely considered to be a China expert. It is worth noting that Xi chose Kazakhstan as the place to announce his One Belt and One Road strategy.

Peter Cai is a research fellow at Lowy Institute for International Policy. This article first appeared in the Interpreter.