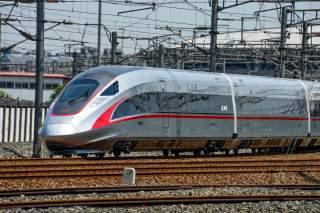 Research at a superconductivity laboratory at Southwest Jiaotong University in Chengdu, western China, is gaining momentum for a prototype maglev train that can travel at a whopping 1,000km/h.

A 45-meter tube has been constructed inside the lab after years of painstaking research. Serious science is behind this toy-train-like apparatus on which a carriage can be constantly levitated at an altitude of 20 millimeters, either in motion or static, with a payload of up to 1 ton, reportedly a new record in the global race to develop next-generation “floating trains.”

Deng’s team aims to complete 400km/h tests this year, paving the way to conducting trial runs of up to 1,000km/h.

Still, there are caveats. Although China is charging ahead with research and commercialization of maglev trains – the Shanghai maglev train has been running between the city center and Pudong Airport at speeds as high as 430km/h since 2002 – safety standards and exorbitant construction and maintenance costs are among the major hurdles to be overcome before any such super bullet trains enter commercial service and gallop along routes across China.

“The train has to be able to come to a full stop in no time in an emergency,” said one expert. “This can be achieved in the open air using brakes and air resistance, but it could be an issue in a vacuum tube where no resistance exists in theory.

“And what if the tube breaks and air enters the system? That could be another problem.”

While the idea of maglev trains sprinting across China may still sound distantly futuristic, China is also revving up upgrades of conventional bullet trains to break the 400km/h mark.

The trains will also travel along international routes where rail gauges change from one country to another. They “will be equipped with two or multiple sets of wheels that can adapt to rail tracks with different standards,” Xinhua quoted a rail expert as saying.

China has secured a deal to build a high-speed railway between Bangkok and the Thai-Laotian border and further to the southwestern Chinese city of Kunming, with an operational speed of 200km/h.

Currently, intercity trains christened Fuxing (meaning “rejuvenation” in Mandarin) shuttle commuters at 350km/h on key routes linking Beijing, Shanghai, Guangzhou, Shenzhen and other cities. China has a sprawling nationwide high-speed rail network of 22,000km, second to none worldwide, on which trains can run at speeds of 200 km/h and higher.