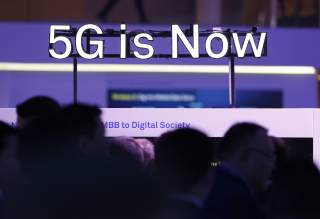 China says the average transmission speed of its 5th-Generation Wireless Systems already doing pilot runs can fetch 10 gigabits per second, almost 100 times faster than the speed of the current 4G network, with the maximum speed capable of being “turbocharged to 20 Gbps.”

So it merely takes the blink of an eye to download a HD movie, according to Xinhua.

In addition to its high speed, 5G internet also boosts high throughput, low latency, high mobility and high connection density as the backbone infrastructure for a host of cutting-edge applications such as automated driving, smart homes and the Internet of Things.

The 5G network can allow up to one million connections per square kilometer in coverage, such as a packed outdoor concert or train station during rush hours.

China’s 5G technology tests started in 2016 with cities like Shanghai already kicking-starting small-scale trial operations in partnership with China Telecom to pave the way for a full commercial rollout by 2020.

China Telecom’s initial 5G buildout in 2018 will use a mid-band spectrum, with more than two million 5G-enabled basestations planned across the nation to provide its current and anticipated customer base with next generation mobile broadband services.

And one of the first 5G smartphones is expected to be launched in the second half of this year by Huawei.

China saw an opportunity to innovate its own 5G, the first generation of technology where they could really be the undisputed leader, Ben Wood, chief of research at consulting firm CCS Insight, told CNBC.

Beijing has signed 25 agreements with telecom operators around the world to trial 5G equipment, according to a Reuters review of company reports. It also announced plans earlier this year to scrap domestic data roaming fees and reduce prices for mobile internet. China’s leadership hopes to have pre-commercial products ready by mid-2018.

Experts say 5G encompass everything from commerce to defense as one of the deep “blue oceans” of the cyber domain, and China is now charging ahead to delineate the rule of the game in the new digital world, with a government-driven, top-down approach executed by its state-owned enterprises as well as an army of private innovators.

Elsewhere across the globe, those who cling to Apple or Samsung products may be unaware that they rely on Huawei’s softswitches, servers and network protocol systems to stay connected: as of 2017, the Shenzhen-based company said had provided core equipment and maintenance for 64 of 130 commercial 4G/LTE networks worldwide, and for 55 of 90 next generation 4.5G/5G networks now under trial.

Yet Washington’s ban on the sale of American-made parts to ZTE exposed the soft underbelly of the country’s tech industry: a lingering dependence on US semiconductors and software.