Is China Training to Invade Taiwan? 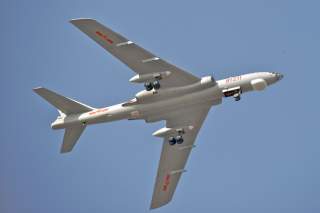 Pilots and aircraft from the People’s Liberation Army’s Eastern Theatre Command were recently marshaled westward for a flyover and simulated dogfights above a craggy, frigid area on the edge of the vast Qinghai-Tibet plateau, the PLA Daily reported.

That seemingly routine exercise in the wildness of western China had everything to do with the southeastern island of Taiwan, a military affairs commentator told the Beijing-based tabloid Global Times.

Ballistic trajectories are different above elevated terrain as the air gets thinner along with the increase in altitude, while oxygen deficiency is also physically challenging for the pilots, who also have to overcome turbulence as their jets fly over mountain valleys and gorges.

Troops under the PLA’s Eastern Theatre Command are tasked with pouncing on Taiwan in the event of a full-blown war to reclaim the self-ruling island.

While they are familiar with landing and parachuting tactics in coordinated amphibious offensives, pilots from the frontier military region are still “out of practice” with Taiwan’s varying terrain, when seeking air superiority to shield the advancement of ground forces to countervail military bases throughout the island is vital to Beijing’s master plan to recapture the territory.

The range is a natural, snow-clad buffer with one of the world’s highest island peaks, Mount Yushan, reaching almost 4,000 meters. Most parts of the rugged mountainous region are a natural “no-fly zone” for bombers and fighters and thus a major obstacle for the PLA Air Force to neutralize Taiwanese troops deployed along the Pacific coast, in particular regiments of airmen at a vital base in the eastern county of Hualien.

Observers believe the PLA will further bolster the training of pilots in flyovers and firing drills along the Sichuan basin and the Tibetan plateau, a vast area of elevated land that bears geological and meteorological similarities with Taiwan.

Meanwhile, photos of the PLA’s air circumnavigation of Taiwan since the second half of 2017 reveal that H-6K bombers, among others, have flown within close range of Mount Yushan a number of times, causing jitters on the island as Taipei realizes the PLA’s heightened capabilities of surveillance and raids against its central hinterlands.