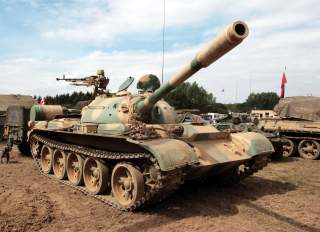 China’s military aims to give its ground forces some extra traction in increasingly challenging battlefield scenarios by testing unmanned tanks that could potentially be equipped with artificial intelligence-based systems.

Aging four-man T-59 tanks, thousands of which are being retired and scrapped after years of service, have been fitted with remote-control technology that is operated by a soldier at a nearby console equipped with a video game-style steering wheel.

“A large number of due-to-retire Type 59 tanks can be converted into unmanned vehicles if equipped with artificial intelligence,” Liu Qingshan, chief editor of Tank and Armored Vehicle, told The Global Times newspaper.

While China has experimented with small reconnaissance robots, drone aircraft and a driverless truck in the past, this is believed to be its first attempt to develop an unmanned tank.

Samuel Cranny-Evans, a land warfare platform analyst at IHS Jane’s, told The Telegraph: “It’s difficult to say why they are doing it, but we do know that they are trying to modernize their forces extensively and inherent in that is building lots of new technologies.”

He believes the People’s Liberation Army may be using the obsolete tank, the first to be domestically produced in China, for its experiments with the technology with a view to fitting more modern vehicles with it if it proves to be successful. Or they could complement newer tanks when deployed in the early stages of a battle.

“The armour on them is really not good enough for a modern battlefield, but this is only a problem if you have people inside. They could use them as a way to add firepower.”

Liu said the more expendable T-59 could be modified to accommodate more cutting-edge anti-tank and anti-personnel weapons for operations deemed too dangerous for human crews.