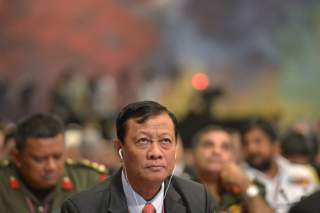 Secretary Carter's speech was widely praised for its balance, including by many Chinese present. Carter noted that America has been in the region for decades ensuring stability, and will continue to do so. China was portrayed as a bemusing troublemaker, throwing the stability of the region into question.

There were some expectations that after last week's U.S. Navy's surveillance flight near Fiery Cross Reef with a CNN crew aboard, Carter would make a strong statement of what U.S. actions will come next. The mood in Washington is getting tougher on China, with calls to 'put skin in the game' and impose costs on China's behavior. Carter's speech did not give a clear indication of what future U.S. action might look like. He did make two concrete calls to South China Sea claimants: stop land reclamation, and don't undertake further militarization.

(Recommended: Is a War Possible in the South China Sea?)

Will that be enough to change China's behavior?

It is unlikely that any claimants will stop ongoing land reclamation at the behest of the U.S., and it is difficult to imagine China doing so. There is more possibility of getting claimants to agree to not (further) militarize, but it will take more than a call from the U.S.

For China at least, U.S. responses to its reclamation activities constitutes 'meddling', as was made clear in China's recent Defense White Paper. As such, these U.S. pronouncements fit neatly into China's powerful 'persecution by the hegemon' discourse, the time-honored response to which is for Beijing to bristle and disregard. Indeed, Sun mentioned several times in his remarks that China would not subjugate itself to hegemony.

In conversation, several participants from Asian countries, including China, felt that the U.S. overstated the challenge Chinese activities in the South China Sea pose to stability in the region. The Indonesian Defense Minister set out his country's most pressing security concerns, both traditional and non-traditional, and China's activities did not feature. I got the sense that while South-East Asian countries welcome the U.S. presence in the region, they would like the rebalance to also focus on, for example, countering terrorism, natural disasters, theft of national resources, and narcotics smuggling.

Criticism of China had begun before Admiral Sun even reached the podium, largely for the delegation's lack of seniority. China has not sent a ministerial-ranked representative except in 2011. This is certainly unfortunate, but does not represent disdain for the Shangri-La Dialogue. Rather, it reflects the lack of international experience among high-level officials, and the anxiety about engaging openly with unscripted questions, of which there were plenty.

Sun's scripted comments focused on China's role in providing global public goods such as multilateral humanitarian interventions and anti-piracy. He said China's construction on islands and reefs is “mainly” for improving their functions and improving the living conditions of people stationed there. He mentioned many times China's commitment to friendship, sincerity, faith, and amity. While not incendiary, the message was clear: the South China Sea is ours, and we'll do what we want there.

Lack of detail meant that the Q&A session was heavy with questions asking Sun to clarify China's position, for example on the nine-dash line, international law, and freedom of navigation. Lowy Non-Resident Fellow Bonnie Glaser asked Sun to explain how Chinese military instructing a U.S. aircraft to leave what China described as a 'military alert zone', but which international law would describe as international air space, did not constitute a challenge to freedom of navigation. Sun spent much of his response noting that he did not have time to answer fully, and did not address most of the questions raised.

Sun's remarks, and his (non-)responses to questions, were unsurprising and therefore disappointing. China missed an opportunity to address international concerns about the South China Sea. Sun did not make China sound like a confident and sophisticated international actor with a genuine grasp of the concerns of the region.

But this would not have been the primary purpose of the speech from the Chinese perspective. What constitutes success for China here is how the domestic population understands the event, and Sun's repetition of principles and examples of Chinese global responsibility will be well received in China. Likewise, the critiques of China's activities in the South China Sea will be read as typical. It is unlikely that China will reflect any more deeply on the approbation it is receiving than it did before.

Both Carter and Sun emphasized calm and a desire for peace, and that success for any in the current international circumstances depends on success for many. China calls it a “community of common destiny”; Carter referred to “rising and prospering together”. However, despite this common language, the U.S. and China are not really listening to each other or getting any closer to understanding each other's concerns. This is a problem when mutual strategic mistrust is recognized as a key risk factor for misperception and miscalculation.

As the U.S. increases its tough talk, and China continues to reclaim land at an extraordinary pace and scale, both would be wise to pause and consider carefully the longer-term implications of their actions and rhetoric.

This piece first appeared in the Lowy Interpreter and is republished with permission.