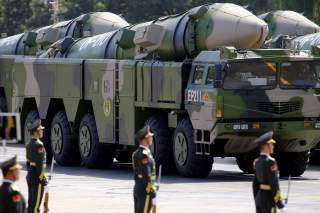 India conducted a successful test of its most advanced intercontinental ballistic missile (ICBM), a nuclear-capable Agni-5, on Thursday, underscoring a potential threat to China as well as Pakistan.

China is also within range of nuclear-armed North Korean missiles and Japan is mulling whether it should develop similar capabilities. But there has been surprisingly little focus on Chinese efforts to develop a missile defense against these threats.

Bruce W. MacDonald, a top US missile defense expert, says it’s likely that China is stepping up efforts to deploy a strategic missile defense system with a limited number of interceptors in the next few years. He notes that India’s growing nuclear ICBM capability is a larger motivating factor than any threats posed by North Korean, Japanese or US missiles.

“China is worried about North Korea but it is not worried about being attacked by them,” MacDonald told Asia Times. Vague hints that Japan is mulling developing missiles with possible nuclear capability are also not a major Chinese concern at this time, he says.

India, which engaged in a tense border standoff with China at Doklam last year, is another matter. MacDonald argues, however, that any anti-missile technology that China fields against India will be modest — unless relations with New Delhi take an unexpected turn.

China also isn’t eyeing a “crash program” to defend against US ICBMs, in spite of ongoing modernization of the US missile arsenal. MacDonald says Beijing will likely stick to an earlier “deterrence” policy which holds that having nuclear weapons will deter attacks due to the promise of retaliation and mutually-assured destruction.

At the same time, MacDonald stresses that China’s hidden motive in pursuing missile defense is that such activities can be used to develop anti-satellite (ASAT) weapons. “ASAT weapons are the single biggest reason for China to pursue a missile defense program,” MacDonald said, noting that this factor even outweighs Chinese concerns about India’s nukes.

John Pike, a space security expert who heads the military think tank globalsecurity.org, agrees that China is moving on missile defense. “We haven’t seen much coming out of China on missile defense thus far, but I would certainly expect to see more,” Pike said.

He authored a November 2015 report, with Federation of American Scientists President Charles Ferguson, titled ‘Chinese Strategic Missile Defense: Will It Happen, and What Would It Mean?’

MacDonald’s assessment then was that China was likely working to deploy a limited anti-missile shield, particularly in light of the fact that it had tested so-called strategic ballistic missile interceptors at least three times since January 2010. But he doesn’t know, based on publicly available sources, if China has tested any interceptors since.

He says most factors favoring China’s deployment of a missile defense system outlined in his 2015 report haven’t changed. But he notes that Chinese President Xi Jinping’s increasingly strong leadership position since 2015 and his pride in China’s military prowess makes it more probable that anti-missile efforts will move ahead.

MacDonald notes that India began deploying its canister-launched Agni-5 ICBM in 2016 in a move that put all major Chinese cities within range of Indian nukes for the first time. Another longer-range, bigger-payload Agni-6 ICBM capable of carrying multiple warheads is believed to be under development, though Indian officials are tight-lipped and it isn’t clear when the new missile will be tested and deployed.

At the same time, the analyst asserts that India’s offensive nukes weigh more on Chinese leaders for domestic political reasons than for the actual threat they represent to China.

He notes the rockets India and China have pointed at each other are for deterrence rather than actual war-fighting. But Beijing may feel it needs to develop an anti-missile response lest China’s perceived nuclear vulnerability to India become a hot political issue at home.

Another factor nudging China to deploy some type of missile shield is a fear that India may develop its own. India’s Defense Research and Development Organization has said it is working on ways to protect the country against missiles that have a range of up to 5,000 kilometers. And MacDonald’s 2015 report quoted a Chinese academic as saying: “Can you imagine India having strategic ballistic missile defense and China not having it?”

Global Security’s Pike adds that China should worry about a Japanese ICBM threat. He noted that Japan’s Epsilon rocket, which carried an Asnaro-2 radar satellite into orbit on January 17, can carry nuclear warheads. “The difference between a missile and a satellite launcher isn’t altitude, but attitude,” Pike said.

Beyond the threats posed by India, North Korea and Japan, and the need to contain domestic criticism, MacDonald says China has other reasons to develop anti-missile capability.

For one, such efforts would provide a better understanding of missile-defense technology and the anti-missile vulnerabilities of potential foes like the US and India.

China, moreover, has a small nuclear missile arsenal compared to the US and Russia. Selective use of anti-missile interceptors would help it protect the survivability of its deterrence. China may also want to use interceptors to defend critical “point targets” like military facilities or key infrastructure like the Three Gorges Dam from possible attack by India or others.

But potential ASAT testing remains the real elephant in the room when it comes to Chinese missile defense.

MacDonald notes that China was internationally criticized in 2007 when it conducted a kinetic-energy (inert projectile) ASAT test on a target satellite that scattered hazardous debris in space. The test also undercut the credibility of China’s earlier stance against the weaponization of space.

But destroying or blinding US spy satellites is expected to be a big part of Chinese strategy in a war with the US. MacDonald notes that unlike full ASAT tests, missile defense tests don’t generate orbital debris.

In this context, nurturing missile defense allows China to continue ASAT testing under another guise, while ducking foreign criticism. The US also can’t chide China for developing anti-missile systems because it’s doing the same against North Korea.

But there are downsides that might cause China to think twice about deploying an anti-missile shield. Among them: it would be extremely costly and might trigger an adverse response from India, Japan and the US. It would also contradict China’s criticism of missile defense efforts by other countries.

Will Chinese efforts to develop an effective anti-missile shield be more successful than the US? Much has been made of China’s growing technological prowess. MacDonald says China faces the same challenges as the US in perfecting a technology that has been compared to “hitting a bullet with a bullet.”

Even so, the US must adjust to the idea of China being a player in anti-missile technology. MacDonald notes that American attention until now has been focused on China’s modernization and expansion of conventional nuclear forces.

“US security policy has assumed that the United States was the only game in town when it comes to missile defense,” MacDonald noted.