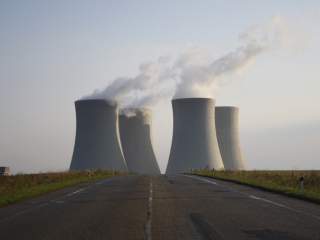 In the wake of the 2011 Fukushima nuclear disaster, Chairman of the World Association of Nuclear Operators Laurent Stricker suggested that “overconfidence” could undermine the safety of nuclear power plants. While the Chinese nuclear industry may not necessarily be overconfident, its ambition is undeniable: the country has brought nearly twenty reactors online in the past decade and has around two-hundred proposed or planned in an all-out push to reduce its dependence on fossil fuels. And after twenty-five years of developing nuclear power domestically, Chinese companies are now seeking to export their technology abroad. Whether they can do it safely and sensibly remains an open question.

Compared to established nuclear players like France’s Areva, Russia’s Rosatom, and America's Westinghouse (now owned by Toshiba), Chinese companies are relative newcomers to the international market and eager to compete. In 2015, Chinese state-owned enterprises (SOEs) signed important, multibillion-dollar nuclear deals for projects in the United Kingdom, Argentina, Pakistan and Iran. At the end of last year, China’s two main nuclear industry SOEs formed the joint venture Hualong International to promote more effectively the Hualong One, a new Chinese-made “third-generation” reactor design, to international buyers as the industry’s “flagship brand.”  In early January 2016, an official from the China National Nuclear Corporation (CNNC), one of the two SOEs behind Hualong International, stated that the company was negotiating exports for the design with twenty countries. In the next five years Chinese companies could invest in or begin building twenty-one reactors overseas, including eight domestically designed models.

Importantly, the total cost of the Hualong One is roughly two-thirds that of American, Japanese or European models, suggesting that the joint venture is aiming to undercut competitors and attract new customers with a more affordable price tag. Although Hualong International is not the only company to market a brand-new third-generation reactor—Westinghouse signed a deal to build its first AP1000 model in China without having previously completed any—it is the first to do so without a significant global track record. Even Westinghouse, which has been building commercial reactors for nearly sixty years, has encountered multiple delays in its recent AP1000 projects. One Chinese nuclear-industry scholar suggested that Westinghouse “oversold the system” and “promised more than [it] could deliver.” A relatively inexperienced company like Hualong International may face similar, and possibly more significant, stumbling blocks when it operates on the global stage.

There are a number of additional safety, security, and financial implications for China and other countries involved as well.

First, although China has “shown unprecedented eagerness” to achieve the world’s best nuclear safety standards, both domestic and foreign experts have pointed out that China is still catching up on safety matters and should gain more operating experience before building more plants. Some point to last August’s explosion in Tianjin and a landslide of construction waste in Shenzhen as examples of China’s lack of safety culture. Furthermore, even if China’s domestic safety practices are well established, that may not translate to equal competence in foreign markets. One CNNC official also stated that the company’s primary focus is “to tap the demand in emerging countries,” which some worry lack the necessary transparency and regulatory oversight for operating safe nuclear plants. Many experts believe that countries with little or no past experience in nuclear power, including over forty-five actively considering embarking on nuclear programs, constitute the fastest-growing risk in the industry. The combination of implementing new technology in unproven markets may lead to unpredictable consequences.

Second, the Chinese government has disregarded security concerns by providing Pakistan with civilian nuclear technology. Chinese companies have made successive agreements to build at least six reactors there since 2004, even though Pakistan is not a member of the Non-Proliferation Treaty (NPT). China announced its first two deals only after it joined the Nuclear Suppliers Group (NSG), which prohibits its members from exporting nuclear technology to Pakistan and other nonmembers of the NPT. Under controversial circumstances, it later agreed to more deals that directly conflicted with the NSG mandate. Even if Pakistan’s case is unique, and even if the Chinese reactors do help to ameliorate Pakistan’s dire energy crisis without major security consequences, China’s willingness to circumvent international regulations calls into question its commitment to secure nuclear operations in other places around the world.

Third, the scope of Chinese nuclear ambitions could entangle both its companies and customers in floundering economic partnerships. The worldwide nuclear industry is rife with disappointing outcomes caused by intractable design and cost issues, and even improved third-generation plants have encountered a wide range of production impediments. Although Chinese companies have had considerable success building plants domestically, there have been continuing struggles with standardizing production that may make it difficult for them to build elsewhere. Adding the fact that Chinese companies are often willing to make risky investments in order to promote their international ventures—including selling the first Hualong One to Argentina, which does not have access to international credit markets because of bond defaults—could be a recipe for messy financial fallout many years down the line. On a scale as large as the one Chinese nuclear companies aspire to reach, initial infrastructure roadblocks or sour deals could stymie longer-term ambitions.

Safe, reliable and cheap nuclear technology has always been the holy grail of those hoping for a “nuclear renaissance.” Some believe one is already taking place within China. And Chinese companies are exceptionally eager to apply their domestic experience overseas, potentially bringing low-carbon electricity to untapped and needy international buyers. But with such complicated and frequently problematic technology, Chinese companies should wade carefully—not dive headfirst—into the untested waters of building nuclear plants abroad.

Gabriel Walker is a research associate in Asia Studies at the Council on Foreign Relations. This article first appeared in Asia Unbound.