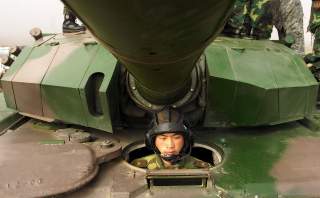 "Although the military has not released any information, research into carrier-based UAVs started long ago, and ship-based UAVs on destroyers and frigates have already been used in training," Li Jie, a Beijing-based naval expert, told the Chinese state-owned Global Times.

However, Chinese industry is not willing to enter into the naval unmanned aerial vehicle market without “government support” because of the technical challenges and the risks involved—which is a stance similar to the one adopted by U.S. industry. “Considerable resources are needed in carrier-based UAV research," Shi Wen, a chief engineer at China Aerospace Science and Technology Corp (CASC) told the Global Times.

Indeed, even the United States Navy—which has far and away the most developed naval aviation capabilities on the planet—has lagged behind land-based air forces in developing and fielding unmanned aircraft. The U.S. Navy has tested launching and recovering an unmanned fixed-wing aircraft from the deck of a carrier with the X-47B program, however, the service has not yet fielded an operational unmanned aircraft with its carrier air wings.

One abortive U.S. Navy attempt to develop such an aircraft—called the Unmanned Carrier Launched Surveillance and Strike (UCLASS)—became mired in the Pentagon bureaucracy and was later terminated. The UCLASS program was eventually resurrected as the Carrier-Based Aerial-Refueling System (CBARS). The U.S. Navy has released a request for proposal for what is now the MQ-25 Stingray last October. General Atomics, Lockheed Martin and Boeing are competing to build the aircraft—the Navy is expected to pick a winning design for the now de-scoped program later this year.

While naval unmanned aircraft are difficult to develop, there are other very advanced capabilities that do not require a contractor to assume as much risk. Shi said that China has made enormous strides in developing artificial intelligence and the advancing the concept of manned/unmanned teaming between manned fighter aircraft such as the Chengdu J-20 and future unmanned combat aircraft. "We are making efforts to promote artificial intelligence (AI) for UAVs to allow manned aircraft to co-pilot UAVs," Shi said.

The Chinese are leveraging the success of their Caihong series unmanned aircraft, including the CH-3, CH-4 and the advanced CH-5—which can conduct surveillance and attack missions. "On average, every CH-series drone has a flying time of more than 1,200 around the world every year, so we have a huge database to support AI technology research," Shi said.

Sam Bendett, a researcher at the Center for Naval Analyses, said that the Chinese are not exaggerating. “Are they capable of developing what they claim- I'd say yes, they are,”Bendett told The National Interest. “There is a massive Chinese military-industrial complex behind Chinese UAV developments, and Chinese industry can certainly manufacture a very wide variety of armed and ISR [intelligence, surveillance and reconnaissance] drones. Once again, the real issue is how these drones will handle themselves in actual combat.”

China’s advancements in the field of unmanned systems coupled with their advanced artificial intelligence developments could produce interesting results. “There will be lots of technology development, testing and evaluation,” Bendett said. “Match that with China's potent AI development, and a very interesting picture emerges.”