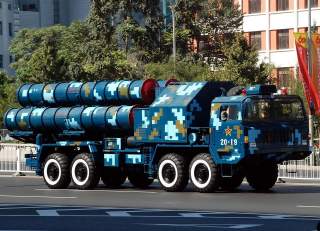 Satellite imagery appears to confirm that China has nearly completed construction of new fortification that could be used to house advanced surface-to-air missiles batteries such as the HQ-9.

According to the Center for Strategic and International Studies (CSIS) Asia Maritime Transparency Initiative, the fortifications are being built on Fiery Cross, Mischief and Subi Reefs.

“Eight of these buildings are being constructed on each of the three outposts. Each measures about 66 feet long and 33 feet wide,” the CSIS posting reads.

“Unnamed intelligence officials who spoke to Reuters indicated that the roof of each concrete building is retractable. This could allow transporter-erector-launcher vehicles carrying missiles—like the HQ-9 SAM systems China has already deployed on Woody Island—stationed within the structures to fire from inside without exposing themselves.”

For the Chinese, the fortified launch positions are an advantage because systems such as the HQ-9—which would normally move as part of their survival strategy–don’t have room to maneuver on the small artificial islands.

“Unlike the HQ-9s on Woody Island, which are covered only by camouflage netting, those deployed to the Spratlys would enjoy some protection from the elements, especially corrosive seawater,” the report states.

“With the roofs closed, the shelters would also conceal launchers from view, thwarting overhead surveillance and preventing adversaries from knowing how many launchers (if any) are present at any given time. Finally, in the event of actual conflict, the structures could withstand indirect strikes or small weapons fire.”

The islands—while a thorn in the side of the U.S. forces stationed in the Pacific—are quite vulnerable in the event of a conflict. China has been slowly militarizing the area as Beijing ramps up its campaign to claim much of the South China Sea for itself in contravention of international law.