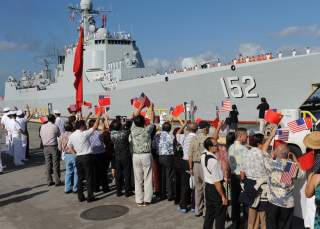 What has followed is the most substantial restructuring of the PLA since it was modelled on Soviet military forces in the 1950s. So far, much of the analysis of this reorganization has focused on the President Xi’s purges and the consolidation of PLA power under Communist Party (CCP) and Central Military Commission (CMC) control and oversight. However, that view offers only a partial explanation for the ongoing reforms. The reorganization is part of a decades long process of military strategic thinking and force structure development rather than simply a power play from President Xi.

There are good reasons why the reorganization of the PLA has also been compared to the 1986 Goldwater-Nichols Act that reconfigured the U.S. Department of Defense and clarified the chain of command to allow for effective implementation of joint operations utilizing all military branches.  The current PLA reforms have their roots in the PLA response to the effectiveness of the U.S. military during Operation Desert Storm— a success made possible by the Goldwater-Nichols reforms. In 1991, in the the immediate aftermath of Desert Storm, Colin Powell stated, “You will notice in Desert Storm nobody is accusing us of logrolling and service parochialism and the Army fighting the Air Force and the Navy fighting the Marine Corps. We are now a team. The Goldwater-Nichols legislation helped that.”

It is no coincidence that China took its first major step towards strategic reform in 1993, when Jiang Zemin stated the new PLA strategy must be focused on “winning local wars that might occur under modern especially high-technology conditions.” Essentially, this encompasses the capabilities and strategies that helped the U.S. rapidly win the Gulf War: precision-guided munitions, information superiority, ground-, air-, and space-based C4ISR, and coordinated joint operations.

Although China did not publically focus on these concepts until it released its 2004 Defense white paper—by which time they had been renamed “informationalized” or “informationized” warfare—the PLA has focused on developing a fighting force to win an informationized war since 1993. This strategic focus is exemplified by substantial shifts in its force structure, weapons procurement, and strategic development.

President Xi’s announcement of a 300,000 troop reduction of the PLA Army (PLAA) marks the third major cut in army personnel since 1997, totaling 1,000,000. The PLA has also shifted its focus away from the historically dominant ground forces and towards bolstering the Navy (PLAN) and Air Force (PLAAF). Both are seen as crucial for informationized warfare.

Furthermore, the December 2015 promotion of the PLA Rocket Force (PLARF) to a full military branch, and the creation of a Strategic Support Force (PLASSF)—which will focus on space and cyber—also indicate that strategic priorities of the PLA have shifted to information-based joint warfare, and an emphasis on technology while being able to fight the full spectrum of conflicts from irregular to strategic warfare.

The PLA’s weapons development and procurement efforts have also focused on developing the ability to implement informationized warfighting strategies like anti-access/area-denial (A2/AD). In the mid-1990s China’s entire conventional missile force was 50 short-range ballistic missiles (SRBMs) only capable of reaching Taiwan. Now, the PLA possesses 1,200 SRBMs, the world’s first anti-ship ballistic missiles (ASBMs), an array of air, land, and sea launched cruise missiles, and strong air defenses. This has expanded the range of of China’s conventional forces to cover the entire first island chain and potentially parts of the second island chain. Additionally, Chinese space capabilities have grown from 10 satellites in 2000 to 181 in 2016.

Yet, writing strategy papers and spending money on weapons is substantially easier than properly reorganizing and directing a military’s human power. In this regard China has two substantial problems. First, China has never fought a modern war and no amount of sophisticated training guarantees successful implementation on a hot battlefield. Second, the pre-reorganization PLA was profoundly ill-equipped to direct a fighting force in an informationized war that necessitates effective coordination of joint forces.

The recent reforms have clearly been designed to address these problems. They have eliminated the bureaucratic backbone of the PLA—the four general departments (GDs) and the seven military regions (MRs). The GDs together performed tasks roughly comparable to a department of defense, while the MRs were essentially semi-autonomous regional military administrative hubs.

This helped lead to operational failures driven by the impact of the GDs and MRs on the PLA’s structure. The GDs and MRs held a substantial amount of localized power leading to squabbles and rivalries with other entities— similar to the US military before Goldwater-Nichols. The MRs possessed so much autonomy that they “operated like mini-states with their own schools, hospitals, hotels and newspapers, many of them moneymaking.” Combined with an unclear chain of command there was minimal incentive for cooperation between branches and lack of effective civilian oversight led to corruption and cronyism.

The GDs have now been replaced with fifteen assorted organizational bodies under the supervision of the CMC chaired by President Xi. Five theater commands—focused solely on operations—have taken the place of the MRs. If properly implemented, the result will be that, “the PLA will have two distinct chains of command: an operational chain passing from the CMC to the theaters to the troops, and an administrative chain flowing from the CMC to the service headquarters to the troops.” This bears substantial similarity to US military reorganization under Department of Defense supervision through Goldwater-Nichols.

This is why outside efforts to assess the reorganization of China’s forces should not focus on the idea that President Xi’s motivation to simply make the PLA subservient and loyal to the CCP. Militaries of all nations tend to be large and obstinate bureaucracies with substantial vested interests. Military clashes with civilian leaders are not rare. For example, parts of the U.S. military fought a long bureaucratic battle behind the scenes against Goldwater-Nichols. The Navy went so far as to set up a “war room” to fight the bill. Famously, Senator Goldwater got an inside tip on the phone number of naval war room and administered a verbal dressing down to the recipient of the subsequent phone call.

In trying to reform the PLA for modern warfare President Xi faces an even more difficult array of entrenched interests. As previously noted, the lack of oversight in GDs and MRs made them magnets for corruption.  The traditionally dominant army is restless about its de-emphasis and even more rumored personnel cuts. Plus, there remain numerous personnel who hold their positions as a result of the cronyism and nepotism that was allowed to run rampant for decades. There are many among the ranks displeased with the new state of affairs.

A combination of all three of these aspects of the reform effort can be observed in the two most high profile purges in the PLA: Guo Boxiong and Xu Caihou. The purges of Xu and Guo were shocking as they had been arguably the two most powerful members of the PLA since Jiang Zemin promoted them in 1999. The two generals were able to engage in sale of promotions, embezzlement, and bribery because they staked out fiefdoms within the decentralized PLA bureaucracy and were afforded protection as Jiang disciples.

To be sure, the PLA purges under President Xi are the most substantial since Mao. However, “considering the fact that Guo and Xu controlled the promotion of military elites for about a decade, the purged 42 high-ranking officers constitute only a very small portion of PLA leaders.” These purges are not Stalinist exercises in authoritarian excess and delusion.

Certainly President Xi has taken advantage of the current apogee of his power and legitimacy to battle vested interest within the PLA. However, Xi’s ultimate goal seems to stem from the desire to build a modern and meritocratic military capable of fulfilling the “China Dream” rather than from paranoia or self-aggrandizement.

Accordingly, it is much more instructive to look at two decades of policy and strategic planning rather than just President Xi in assessing PLA reorganization and reform.  Over the past two decades Chinese civilian and military leaders have built one of the world’s most powerful and diverse fighting forces. Corruption and an anachronistic command and control structure was one of the last hurdles towards full modernization. With the reorganization focused on implementing civilian oversight and increasing joint operations capabilities, the process looks very much like an authoritarian twist on Goldwater-Nichols.

Anthony H. Cordesman holds the Arleigh A. Burke Chair in Strategy at CSIS. His current projects include ongoing analysis of the security situation in the Gulf, U.S. strategic competition with Iran, the conflicts in Syria and Iraq, a net assessment of the Indian Ocean region, Chinese military developments and U.S. and Asian assessments of these developments, changes in the nature of modern war, and assessments of U.S. defense strategy, programs, and budgets