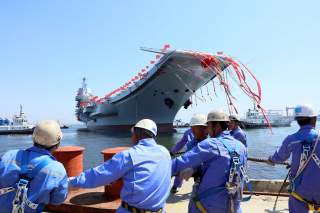 The Beijing-based Global Times has said the first locally made carrier, not yet christened, is likely to be ready for combat “within two years” after its expected delivery to the navy by the end of this year.

The date of the launch was no surprise – Monday is the day the People’s Liberation Army Navy was established.

The yet-to-be-named vessel set off from its berth at Dalian Shipyard in northeast China, where Liaoning, the country’s first carrier, underwent a seven-year retrofit after a hulk was bought from Ukraine. The latter has now begun service as China’s first seagoing airbase.

Liaoning provincial maritime department gazetted a no-entry zone last Friday, barring ships from entering roughly 1,500 square kilometers of water in the Yellow Sea, off the coast of Dalian from April 20 to 28.

The Beijing-based Global Times has said the first locally made carrier, not yet christened, is likely to be ready for combat “within two years” after its expected delivery to the navy by the end of this year.

Pictures posted online show that scaffolding around the new carrier has been removed, with an active phased-array radar system clearly visible on the bridge. The flight deck and curled-up bow had also been cleared of items.

This picture shows workers using water cannons to clean the deck while the carrier’s anchor is lifted. Several cranes were also spotted on the deck in another picture taken earlier this month when equipment and food and fuel supplies were believed to be transferred on to the carrier.

Beijing started building the carrier in late 2013, and overseas observers believed that it could be a copy of the Liaoning, as Chinese engineers and shipbuilders sought to use the diagrams obtained along with the Soviet-built hull.

Yet the speed with which China has allegedly replicated the Soviet design for a new carrier with indigenous technology input has still surprised analysts. The sea trial comes just a year after the carrier’s dry dock was flooded for the first time in April 2017.

Known specifications of the home-built carrier include a displacement of around 65,000 tons, conventional diesel and steam propulsion, plus a steam-powered catapult launching system for planes on board.

Meanwhile, the Liaoning, was in a convoy over the weekend together with missile destroyers and ship-borne fighters, en route from the South China Sea to the western Pacific for a long voyage to help its crew adapt to coordinated offensives on the high seas, Xinhua reported.

Liaoning is now in waters east of the Bashi Channel, between the Philippines and Orchid Island off Taiwan, in a mock combat with two PLA Navy Type 052C destroyers, according to the PLA Daily.