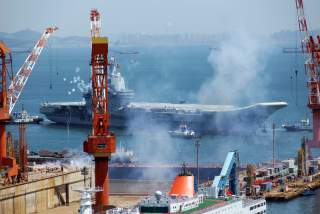 Latest photos from the Dalian Shipyard where China’s first indigenous aircraft carrier is berthed after its maiden sea trial suggest the 65,000-ton vessel could be undergoing a major refit.

The Chinese carrier made its first splash in April 2017, so the news that its entire hull was lifted out of the water for checks and repairs just a few days after its first voyage has fueled speculation that something has gone wrong.

Yet an analysis that appeared in the Shanghai-based opinion website guancha.cn argued that an earlier dry-dock check could mean swifter progress towards the carrier being delivered.

The propulsion system involving paddles, shaftline, valves and other parts below a ship’s waterline can only be checked and repaired when it enters a dry dock.

The writer suspected that the new carrier needed some cleaning – of its bulbous bow, as well as other sections of its hull, to get rid of barnacles and other stuff that are “hitching a ride”. There was also speculation about the need for some touching up to apply newer layers of anti-erosion coating.

Chinese military observers said it was routine to finetune the propulsion system and configuration after a carrier’s first sail.

However, it’s not unusual for new carriers in other navies’ to suffer glitches during sea trials.

The port propeller of France’s nuclear carrier Charles de Gaulle broke during her final sea trial in the Atlantic Ocean in 2000, which caused it to head back to its home port to get a replacement fitted. Inquiries that followed showed similar structural faults in the other propeller and spare propellers.

The Liaoning, China’s only carrier currently in service, also had a two-month-long dry-dock check after its fourth trial in 2012.

It was also revealed that Liaoning’s second dry-dock maintenance in May 2014, a year after it entered service with the Chinese Navy, was beset with chaos and delays as engineers underestimated the wear and tear the Soviet-built cruiser-turned-carrier endured after a year of hectic training and navigation.