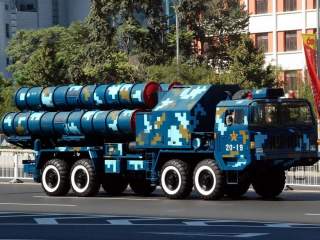 I don't mean to downplay Fox News's exclusive that China has deployed advanced HQ-9 surface-to-air missiles to Woody Island in the South China Sea. It is another escalatory move by Beijing and does raise the stakes in the increasingly tense game being played around various disputed territories in the region.

But to add a bit of context, this is not the first time China has deployed advanced military equipment to Woody Island—last November it was J-11 fighter jets. So as Mira Rapp-Hooper from the Center for a New American Security says, this deployment is not totally unprecedented.

It's also worth noting that the satellite imagery which Fox News has published shows that the vehicles which make up the two HQ-9 batteries are parked on a beach rather than in any purpose-built facility. The HQ-9 is a mobile system; its missiles, radars and command systems are all mounted on heavy vehicles which allow them to not only deploy away from bases but also off-road. But these batteries do have home bases where the missiles, radars and other systems are maintained, and where the crews are housed. The Chinese also build permanent launch sites for their HQ-9s, large concrete structures which are easy to spot on satellite.

As far as I am aware, there are no indications that such permanent launch sites have been built on Woody Island. We would know it if they did. Perhaps slightly harder to identify from satellite imagery would be the maintenance buildings, which would look more generic from above. We do know that China has long had ambitions to expand its military presence on Woody Island, so it's possible such facilities exist.

The need for such facilities would likely be particularly acute given the local environment. When J-11 fighters deployed to Woody Island in November, experts noted that corrosion from sea air would be a major problem for these aircraft if they stayed for long on the tiny outpost. We could surmise that the same is true for the HQ-9.

The facts are far from clear, but for now it seems possible that this is a temporary deployment similar to the J-11 show of force from last November, and not a permanent basing measure.

Sam Roggeveen is editor of the Interpreter, where this article first appeared.