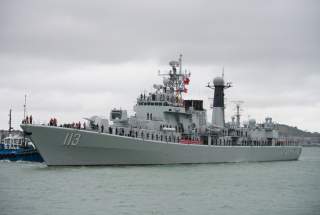 China's navy, from its founding in 1949 to the 1996 Taiwan Strait crisis, was focused on preventing Taiwan from becoming formally independent. This goal did not require long-distance operations that would require an at-sea resupply capability. Now, however, Beijing has declared its status as a global maritime power.

Amateurs, it is said, talk about tactics, but professionals study logistics. The leaders of China's navy, the People's Liberation Army Navy (PLAN), apparently have finally understood the vital role played by logistics in any effective military force. The PLAN's current modernization program may be dated to the mid-1990s, but until recently it failed to include expanding replenishment-at-sea (RAS) capabilities.

Before the turn of the century, the PLAN included just one Soviet-built oiler and two relatively limited Fuqing-class oilers for its entire fleet. The ex-Soviet Komandarm Fedko-class replenishment ship began construction in the Ukraine in 1989, was purchased by China in 1992, and joined the PLAN in 1996 as the Qinghai-Hu (AO 885). It is a large ship, displacing 37,000 tons, making it almost as big as the most numerous US oilers currently operating. The Qinghai-Hu has four replenishment stations and China added a small flight deck and hangar capable of operating one Z-8 transport helicopter. The ship is reportedly underpowered, with an engineering plant based on just one diesel engine, but has supported ships deploying to Guam and on Gulf of Aden counter-piracy operations.

The two Fuqing-class ships that joined the PLAN in 1980-1982 displace just 21,000 tons. They are equipped with four refueling stations, but have minimal stores replenishment capability. These ships have a small flight deck but no hangar, severely limiting their ability to operate helicopters.

China's lack of emphasis on underway refueling capability before 2005 is highlighted by the fact that Beijing actually built four Fuqing-class ships in the 1980s, but sold one of them to Pakistan in 1988, while assigning the fourth to commercial service.

But additional oilers joined the PLAN in 2005, when two Fuchi-class ships were commissioned. The Fuchi oilers are the first modern RAS ships in China's navy; two improved versions of this class joined the fleet in 2014. This has meant that the PLAN counter-piracy task groups deployed to the Gulf of Aden and beyond have depended almost entirely on the first two Fuchi-class oilers; they were for the most part tasked with 'port and starboard' deployments, assigned away from homeport six of every 12 months.

The improved Fuchi-class vessels now in the PLAN have four refueling and two stores transfer stations, providing the capability to deliver significant quantities of dry goods and ordnance at sea. They thus should be classified as a replenishment oilier or 'AOR,' rather than the standard 'AO'. This is the class of RAS ship required to support long-range operations, although their relatively small size – 22,000 tons – means that they require frequent replenishment from relay tankers.

The PLAN in 2015 includes seven RAS ships. At least one additional Fuchi-class AOR is preparing to join the fleet and the PLAN should be expected to budget for additional ships of this class, or an improved version.

PLAN RAS ships have proven their capability at both astern and alongside refueling. Additionally, they all have flight decks capable of helicopter operations, though only the Qinghai-Hu and the Fuchi-class ships are equipped with the hangars necessary to embark Z-8 logistics support helicopters.

The Chinese navy's experiences in long-range deployments have increased significantly since December 2008, when the first counter-piracy task group departed for the Gulf of Aden. The past seven years of 'far seas' operations have brought home to Beijing the fleet's need to be logistically self-supporting if it is to be an effective tool of statecraft and able to support China's national security priorities at sea. These include disputes in the East and South China Seas, of course, but extend to defending the global trade routes on which China's economic well-being depends.

China's recognition of the importance of logistics support for the PLAN's far seas operations is also recognized in its move to establish a relatively permanent facility at Djibouti. Establishing an overseas logistics system will support, rather than take the place, of RAS ships.

The increasing number of RAS ships entering China's fleet will also allow greater employment of the PLAN's aircraft carriers, the first of which, Liaoning, will within the next decade be joined by at least the first indigenously built Chinese flattop. Carrier operations require the near-constant presence of RAS ships, primarily to replenish aircraft fuel and ordnance, as well as being on-hand to refuel escorting destroyers and frigates.

The PLAN in 2015 has an adequate RAS force to support continuous far seas operations. Increased defense funding and support illustrate Beijing's recognition of the need for improved RAS capability. Additional replenishment ships will be built to better support both those operations as well as future aircraft carrier operations.