China's Message to Asia (And America): We Own the Air and Seas Off Our Shores 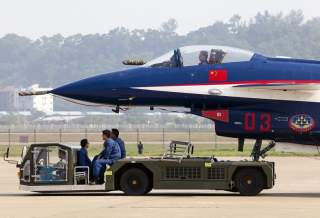 For the second time in a month, a Chinese fighter jet has made an unsafe approach to an American military aircraft.

This time, a Chinese air force J-10 fighter intercepted a U.S. RC-135 reconnaissance aircraft in international airspace over the East China Sea. The Chinese fighter approached at high speed at the same altitude, and reportedlyclosed to within a hundred feet of the converted airliner.

Not only did the Chinese intercept occur in the wake of last September’s much-ballyhooed “Rules of Behavior for Safety of Air-to-Air Encounters” between the U.S. and the People’s Republic of China, but it also occurred even as Secretary of State John Kerry and Secretary of the Treasury Jack Lew were in Beijing as part of the Strategic & Economic Dialogue talks.

The Chinese are likely stepping up their activities in expectation of a ruling in the coming months from the Permanent Court of Arbitration on Chinese claims over the South China Sea.

The Philippines has filed with the Permanent Court of Arbitration regarding Chinese claims over almost the entire South China Sea; Beijing has rejected the legitimacy of the court to rule, and made clear it will ignore any findings by the court. In an interesting redefinition of “unilateral,” Beijing has condemned Manila’s filing with the international court as a “unilateral act,” exacerbating tensions in the region.

Beijing holds the U.S. responsible for the ongoing tensions in the South China Sea. Gen. Fang Fenghui, head of the People’s Liberation Army General Staff Department, stated in a 2013 joint press conference at the Pentagon with then-Chairman of the Joint Chiefs Martin Dempsey, “the rebalancing strategy of the U.S. has stirred up some of the problems which make the South China Sea and the East China Sea not so calm as before.”

Madame Fu Ying, spokeswoman of the Chinese National People’s Congress, China’s legislature, made similar accusations this past March. “The U.S. is strengthening military deployment in the Asia-Pacific region together with its allies since its pivot to Asia,” Fu said.

“Is it not militarization?” She asked. In the Chinese view, the Southeast Asian states would not dare challenge China over its sovereignty claims, if the United States were not manipulating and encouraging them.

At the Shangri-La Dialogue, Chinese Adm. Sun Jianguo made the case even more explicitly. Stating that some countries are:

On one hand setting the example of implementing what is known as freedom-of-navigation operations in the South China Sea, openly flaunting its military force, and on the other hand pulling in help from cliques, supporting their allies in antagonising China, forcing China to accept and implement the result of the arbitration.

Challenging American reconnaissance operations off its shores (even if they are in international waters and airspace) also highlights Chinese complaints about the obstacles to better U.S.-China relations.

The Chinese regularly recite complaints about arms sales to Taiwan, reconnaissance activities off their shores, and the annual Department of Defense report to Congress on Chinese military capabilities as limiting U.S.-Chinese relations. Ironically, the 2016 Department of Defense report on China, which was released last month, highlighted the build-up of China’s air and naval forces.

China, in both word and deed, is sending a clear, consistent message to the U.S. and the rest of the region: The air and waters off China’s shores, including that of its exclusive economic zone, are its sovereign air and sea space, subject to Chinese control.

Foreign military forces enter only at Beijing’s sufferance—and will be challenged if they fail to comply with Chinese wishes. That these claims are far in excess of those granted under international law is irrelevant; indeed, Beijing is prepared to use various legal arguments to support its claims.

By contrast, the American response has been incoherent. At the 15th annual Shangri-La Dialogue, Secretary of Defense Ashton Carter has once again claimed that American ships and aircraft will sail where they want, when they want.

But somehow, that has never meant conducting a freedom of navigation operation actually challenging the status of China’s artificial islands. Instead, the U.S. has engaged in the far milder “innocent passage” around Chinese artificial islands (and arguing that anything more might antagonize other claimants).

There doesn’t appear much interest in clearly challenging Chinese activities around places like Mischief Reef—where a freedom of navigation operation could clearly signal it as international waters.

Efforts by the Department of Defense and Pacific Command to undertake such activities have been firmly squashed by President Barack Obama’s National Security Council, apparently intent upon muzzling any challenges to Beijing.

This sustains a pattern that can be traced back to 2010. At that time, the administration vacillated on whether to deploy the USS George Washington carrier group to the Yellow Sea to support South Korea after its frigate, the Cheonan, was sunk by a North Korean submarine.

Washington eventually ordered the carrier group to the Sea of Japan, east of the Korean Peninsula and away from China. (Only after North Korea shelled the South Korean island of Yeong Pyong-do, killing two civilians, did the administration authorize exercises in the Yellow Sea.)

Now, even as Chinese aircraft are behaving in a dangerous manner around American aircraft, American sailors and airmen will be hosting them for another Rim of the Pacific exercise.

Indeed, Carter trumpeted in his speech at Shangri-La:

And China will also be back at RIMPAC this year. In fact, the United States and China plan to sail together from Guam to Hawaii for RIMPAC, conducting several exercise events along the way, including an event to practice search-and-rescue.

One can only hope that, in the event of an accident involving a U.S. aircraft in future close encounters, the Chinese will put the search-and-rescue experience they’ve gained with us to good use.