China's Military Is Getting Stronger and Could 'Leapfrog' over America 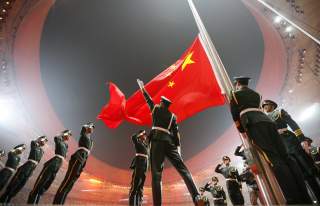 China’s military modernization remains a key concern for the US and its allies. Crucial in that regard has been China’s development of forces geared towards preventing uncontested access to its air and maritime approaches by potential adversaries. Such ‘anti-access and area denial’ (A2AD) capabilities are designed either to prevent an adversary’s access to a particular region (anti-access) or to contest its freedom of movement within that theater (area denial).

The US isn’t standing still. It faces a more challenging task in projecting power into the western Pacific than China does in defending its near and middle seas. Defense is always easier than offense. The US is counting on its ‘third offset strategy’—the development of next-generation technologies—to preserve its military–technological edge in this contest. Yet the third offset may be little more than wishful thinking in any practical sense. And it would be risky to assume that the US will win this race, because several factors may undermine its ability to respond to Chinese developments.

The US faces the dilemma of whether to direct investment towards modernizing its forces or towards ensuring the sustainment and readiness of existing forces. That problem is acute because, as a global superpower, the US faces immediate global challenges. China doesn’t, so it can focus its investment on future East Asia contingencies, including developing more effective A2AD.

US military readiness and combat sustainability are very poor as a result of 10 years of temporary funding arrangements under ‘continuing resolutions’. Without stable budgets, US military leaders can’t pursue adequate defence planning to ensure a balance between modernization, sustainment, readiness and force development. Recent US Navy collisions caused by atrophying seamanship skills, a severe shortage of fighter pilots in the US Air Force, and poor readiness of carrier air wing F/A-18s highlight the problem. There’s also a worrying lack of anti-submarine warfare (ASW) skills and capability in the US Navy.

The latest US defence budget of $700 billion has been passed by the House of Representatives. However, it blasts through ‘sequestration’ spending caps by $72 billion. It will likely be passed by the Senate and signed into law by President Trump, but then the funding will be cut automatically by sequestration unless spending caps are lifted, which is unlikely. With this dismal state of affairs in mind, future projections of US defence spending aren’t good.

The main problem is that budget instability will continue to undermine the US’s ability to maintain adequate readiness while funding modernisation. It simply can’t do both. Nor can it boost the size of its forces to respond effectively to a range of threats around the globe. The Trump administration’s plan to increase the US Navy’s fleet to 355 ships represents an unachievable dream that does little to respond to the immediate growth of China’s navy in both size and capability. As US forces ‘age out’, China will likely continue to introduce new capabilities that will accentuate the perception of a closing capability gap.

China is steaming ahead with its military modernization program, which is based on the informationization (that is, developing an integrated joint warfare capability) of the PLA, while continuing to extend its ability to counter intervention through better A2AD.

The US–China Economic and Security Review Commission recently released its 2017 report to Congress highlighting some key capability areas to watch, including research and development into hypersonic weapons such as the DZ-ZF hypersonic glide vehicle, ‘scramjet’-based hypersonic anti-ship cruise missiles and directed-energy weapons. China has also made significant improvements to its submarine quieting and undersea warfare capabilities as part of its ‘undersea great wall’, and is placing more emphasis on long-range anti-air capabilities targeted against critical US and allied ‘combat enabler’ platforms like tanker and airborne early warning aircraft. New capabilities being developed include a new H-20 bomber that would expand China’s ability to undertake long-range anti-ship and land-strike roles. On the horizon, China is investing heavily in breakthrough fields such as quantum physics, including cryptography, sensors, computers and radars, as well as researching AI and battlespace robotics.

Together, these advances will significantly strengthen China’s A2AD capability and envelope, and make it more difficult for US forces to intervene in a future crisis in East Asia. China is just getting to grips with carrier operations and is continuing to face challenges in gaining experience in joint warfighting and undertaking expeditionary operations. And the US still has an advantage in ASW (though that’s being narrowed) and underway replenishment. But it’s clear that China is determined to move from catching up to leaping ahead in key technology areas.

In this scenario, China could leapfrog US capabilities as it invests in the new A2AD-type capabilities—A2AD 2.0. That could begin to tip the local military advantage in Beijing’s direction.