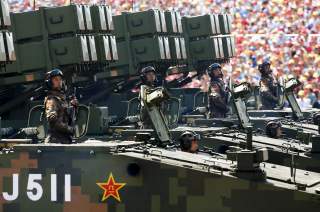 Boosting the military budget, curbing “systemic risks” in the economy and targeting GDP growth at 6.5% were the key policies announced as the curtain went up for the National People’s Congress in Beijing.

On Monday, Premier Li Keqiang told the Chinese parliament’s opening session that the 2018 defense budget would rise to 1.11 trillion yuan (US$175 billion), an 8% jump compared to last year.

As China rolls out new military hardware, such as stealth fighters, aircraft carriers and anti-satellite missiles, spending has dramatically increased in the past few years.

“We can expect that China’s defense budget to continue to be subordinated to, and coordinated with, China’s economic performance,” James Char, a military expert at Singapore’s Nanyang Technological University, told the AFP news agency. “It will likely not be over-militarized.

“Technologically speaking, the PLA has progressed markedly in recent years, with its own research and development in military hardware and growing professionalism reducing the gap with its United States counterpart,” he added.

Last year, the US spent $642.9 billion on defense, the annual Jane’s Defense Budgets Report revealed. President Donald Trump has since proposed an increase in 2018 to counter the growing strength of China and Russia.

Still, Beijing’s build-up in spending sends an “alarming” signal to countries in the region and around the South China Sea.

“The pace and scale of this build-up is really dramatic,” Sam Roggeveen, a Visiting Fellow at the Strategic and Defense Studies Center at Australian National University in Canberra, told the Reuters news agency. “It is extremely alarming for Australia and many other countries in the region.

“There is every indication that China wants to expand what it will call defense capabilities in the South China Sea. I expect eventually we will see warships and aircraft there regularly, if not based there permanently. What is unclear, however, is whether the United States will want to rise to that challenge,” he added.

The People’s Liberation Army is going through an extensive modernization program with analysts and diplomats pointing out the real rise in spending could be significantly more than $175 billion budget.

“Some [of it] will be hidden in civilian spending,” said one diplomat, speaking on condition of anonymity.

Apart from the jump in the military budget, Premier Li reiterated the Chinese government’s mantra of tackling “systemic risks” in the economy.

The anti-corruption drive, one of President Xi Jinping’s major policies, would continue by tackling “activities that violate the law” such as illegal fundraising and financial fraud.

“What China needs to do is to tackle both symptoms and root causes, and take effective measures to defuse potential risks,” Li said.

On the economy, he projected growth of 6.5% compared to 6.9% last year. But then, economists had already expected the world’s second-largest economy to slow slightly as Beijing grapples with rising corporate debt.

In his annual work report, Li also stressed that China had cut its budget deficit target for the first time since 2012, suggesting the government will be more watchful of fiscal spending.

“Policy-wise, the report definitely has a tightening bias,” said Betty Wang, a senior China economist at ANZ in Hong Kong.“In line with expectations, the government is pushing through their reform agenda.”