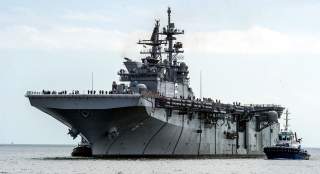 “Construction of the Type 075 ships will take two more years,” a Chinese military source told the South China Morning Post. “The first vessel may be launched as early as 2019 and put into full service in 2020.”

It is not clear how many Type 075 assault ships China intends to build, but the roughly 40,000-ton vessels will afford the People’s Liberation Army Navy (PLAN) significant power projection capabilities. The vessels will be able to carry 30 helicopters onboard—six of which would be able to takeoff simultaneously from the flight deck. The massive 820-foot long—with a 98.4-foot beam—vessels will also feature a well-deck for launching ship-to-shore connectors and amphibious vehicles of various types.

One feature the new Chinese vessels lack compared to their American counterparts is that the Type 075 does not have the ability to support fixed-wing air operations. China does not have a short takeoff/vertical landing aircraft similar to the Boeing AV-8B Harrier II or Lockheed Martin F-35B Joint Strike Fighter. However, there were unconfirmed reports in 2011 that China had started to development work on such an aircraft, as I have previously reported in Defense News.

Together, the Type 075 and Type 071 would provide China with a formidable power projection and amphibious assault capability–second only to the United States Navy. That means that China would have the means to intimidate its neighbors such as Taiwan—which Beijing views as a renegade province—the Philippines and others especially after China builds more aircraft carriers.

But there are questions as to how operationally effective such vessels would be in such a threat environment. “China is not the only country with anti-access/area denial (A2/AD) capabilities and others can impose costs on its maritime forces that might make amphibious assault ships an expensive and risky proposition,” said Alex Alden, a defense analyst at the Center for Naval Analyses and senior fellow at the Center for the National Interest—the think tank that publishes this magazine. “Maybe they too should start thinking about distributed lethality.”

Nonetheless, is Beijing is proceeding with building a carrier fleet. China’s second aircraft carrier—still based on the Soviet-era Kuznetsov design—is well into its construction phase. Meanwhile, China has started construction on the Type 002 aircraft carrier—which is an apparently an indigenous design that dispenses with skijumps.

“My understanding based upon steam catapult testing is that the third carrier will be an attempt at a full CATOBAR design with steam catapults and hydraulic arresting gear that will allow China to launch aircraft with heavier bomb loads and go longer ranges,” Jerry Hendrix, director of defense studies at the Center for a New American Security told The National Interest.

The vessel has been under construction at the Jiangnan Changxingdao shipyard in Shanghai since March 2015 according to the South China Morning Post.