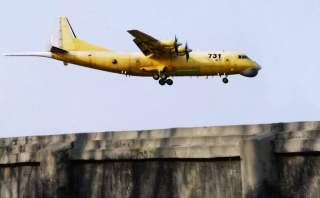 The reports said that several four-engine Gaoxin-6 anti-submarine aircraft were delivered to the People’s Liberation Army Navy late last year, four years after the first prototype of the aircraft was unveiled. Chinese media and foreign outlets have long compared the Gaoxin-6 to Lockheed’s P-3C Orion, which Washington and its allies have long used to patrol waters near China.

However, some experts dispute the assertion. For instance, Li Jie, a Beijing-based naval expert often quoted by Chinese media, told the Hong Kong-based South China Morning Post that “there is still a certain gap between China's Gaoxin-6 and the American P-3C, especially in terms of its flight and reconnaissance ranges.”

A report in the state-run China Daily said the Gaoxin-6 design is based on China’s Y-8 medium-range transport plane, but that “the aircraft can easily be distinguished from other Y-8 variants by its large sea-search radar, mounted below the cockpit, and the magnetic anomaly detector boom that looks like a metal tail.”

It went on to say that the plane is operated by a crew of ten, and “is capable of flying 6,000 kilometers or staying in the air for more than eight hours.”

This is the first large aircraft China has developed specifically for anti-submarine warfare, making Beijing the sixth country after United States, Russia, Japan, the UK and France to have developed such a sophisticated ASW plane, according to the report in the China Daily. Anti-submarine warfare has long been viewed as a major weakness of China’s Navy, which has helped spark something of an arms race in Asia.

“Prior to the Gaoxin-6, the PLA navy only had a handful of the antiquated SH-5 maritime patrol amphibious aircraft and some ship-borne helicopters when it needed to deploy air platforms in anti-submarine operations," Wang Ya'nan, deputy editor-in-chief of Aerospace Knowledge magazine, was quoted as saying by China Daily.

Wang added: “That situation had hugely confined the PLA navy's long-range combat capability because foreign navies' submarines are probably the most dangerous threat to its fleets."

Li, the Beijing-based naval expert, told SCMP that the navy had opted to deploy the first Gaoxin-6 aircraft to the North Fleet in order to contend with South Korea and Japan’s submarines. "The Gaoxin-6 specialises in reconnaissance and searching for submarines. "Both Japan and South Korea have the world's most advanced submarines in the waters of the Yellow Sea and the East China Sea. That's why the navy decided to deploy Gaoxin aircraft to the North Sea Fleet first."

South Korea has amassed a formidable undersea fleet in recent years, including German-made submarines as well as numerous indigenous designs. This fleet is expected to grow at a robust rate in the years ahead.

Japan, on the other hand, has long had a capable of submarine fleet, and—amid growing tensions with China—announced plans to expand the size of that fleet. It has also been modernizing it with the introduction of Soryu-class submarines in 2009.

As Kyle Mizokami has explained on The National Interest:

Mizokami has also noted that submarines would play a central role in Japan executing an anti-access/area-denial (A2/AD) strategy against China in the event of a conflict over the two countries.

“Japan’s fleet of 16 submarines, in the process of being increased to 22, will be the most effective active defense. The JMSDF submarine fleet, composed of the newer Soryu and older Oyashio-class diesel electric submarines, is one of the most professional and technologically advanced in the world. The idea would be to direct Japan’s strength in submarine warfare against Chinese weaknesses in anti-submarine warfare (ASW),” Mizokami wrote back in February.

All of which makes strengthening anti-submarine warfare capabilities a necessity for the Chinese military.

Zachary Keck is managing editor of The National Interest. You can find on Twitter: @ZacharyKeck.