China's Next Aircraft Carrier: Everything We Know (So Far) 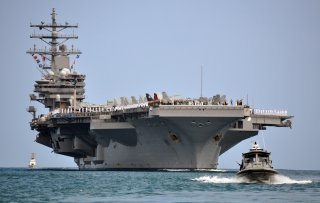 Construction of China’s third aircraft carrier is well underway at the Jiangnan Changxingdao shipyard in Shanghai.

The massive vessel—dubbed the Type 002—is China’s first completely indigenous carrier design. The ship has been under construction since March 2015. According to the South China Morning Post, People’s Liberation Army Navy (PLAN) commander Vice Adm. Shen Jinlong recently visited the shipyards to see the progress on the vessel’s construction for himself.

Not much is known about the Type 002 except that it is a departure from the Soviet-era Kuznetsov-class design that the PLAN has relied on until now. Both the Liaoning–originally the Soviet Navy’s Varyag—and the new Type 001A aircraft carrier—thought to be named Shandong—which is currently under construction at Dalian, are based on the original Soviet Kuznetsov design. Meanwhile, the new Type 002 is thought to dispense with the Russian ski-jump concept adopted from Kuznetsov and makes use instead of U.S. Navy-style steam catapults.

“My understanding based upon steam catapult testing is that the third carrier will be an attempt at a full CATOBAR design with steam catapults and hydraulic arresting gear that will allow China to launch aircraft with heavier bomb loads and go longer ranges,” Jerry Hendrix, director of the Defense Strategies and Assessments Program at the Center for a New American Security told The National Interest.

The Type 002 will likely be larger and far more capable than the Type 001A or the original Kuznetsov-class design.

“The Type 002 is likely the carrier Admiral Wu Shengli talked about before he retired that will incorporate a catapult and arresting gear to enable it to deploy larger aircraft and do so more quickly,” the Center for Strategic and Budgetary Studies’ Bryan Clark, one of the foremost naval thinkers in Washington, told The National Interest.

“It will also likely be larger than the Type 001 or the Liaoning, enabling it to carry more aircraft. The PLAN also wants to expand the range of their carrier-based aircraft, and more importantly, they need to be able to launch early warning and electronic warfare aircraft as well as larger fighter-bombers that can carry more weapons. They need catapults and arresting gear to deploy these kinds of aircraft.”

For China, the new carrier is important as it expands its power projection capabilities.

“Strategically, China wants to be able to use their aircraft carriers to expand the reach of their mainland-based strike, ISR [intelligence, surveillance and reconnaissance] and EW [electronic warfare] systems, so a larger carrier will be helpful to that goal,” Clark said.

“Secondarily, this will give them a carrier able to operate more independently of land-based aircraft, since it will be able to carry larger (and slower) logistics and early warning aircraft. That will be helpful in protecting sea lanes farther from China, such as in the Indian Ocean.”

“It seems clear after [four to five] years of operations with Liaoning, Beijing has fully embraced the advantages that being able to operative high performance jets at sea provides,” McDevitt told The National Interest.

“Carrier based air power can provide peacetime presence along China's long OBOR [One Belt, One Road] sea lane, it can dissuade countries along this Indo-Pacific route from being tempted to interfere with Chinese trade, it can provide air over distant power projection requirements in support of China's global economic and political interests, it can protect or evacuate Chinese citizens abroad in dangerous locales and so on. And, by the way, if one of President Xi's ambitions is for China to become a great maritime power, it needs carriers in its naval order of battle.”

Scholars and naval analysts should look towards how Britain (when it had carriers) and France have operated their flattops to understand how Beijing will operate its vessels.

“Study the use of carrier air by the U.K and France over the past 20 or so years to get a flavor of how smaller carrier based air wings have been used,” McDevitt said. “China will use its carriers the same way.”

What remains unknown is exactly how large and powerful the future Chinese fleet will be—Beijing has been less than transparent about its plans. “China has the money, has the ‘requirement’ and is accumulating the expertise so we should not be surprised by their naval aviation ambitions,” McDevitt said. “What we don't know is what size Navy, including carriers they intend to build. We should continue to press them to tell us.”