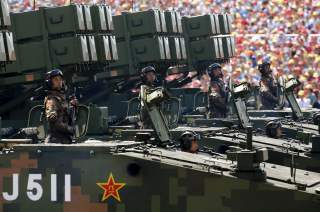 During its 19th National Communist Party Congress spectacular in October 2017, China indicated that it would take a more active approach to foreign policy. There have already been indications that China’s revamped foreign policy is in action in the Korean Peninsula. But whether or not this signals a new era of actively promoting its political system abroad remains to be seen.

On 1 November 2017 the foreign ministries of South Korea and China announced a renormalization of relations, including economic activity, after almost a year of tensions stemming from Seoul’s decision to deploy the Terminal High Altitude Area Defense (THAAD) anti-missile system. On 2 November, North Korean press reported that China’s President Xi Jinping wrote a letter to North Korea’s leader Kim Jong-un expressing his desire to maintain ‘stable relations’. But is it possible to maintain productive bilateral relations with both countries simultaneously?

Although it has been in China’s best interest to trade with North Korea to keep its outdated, centrally-planned economic model from imploding, the relationship has been frayed for most of Xi and Kim’s time in power. China’s surge to global prominence leaves little time for developing relations with North Korea, whose missile development is bringing unwanted attention to China’s backyard. North Korea, on the other hand, feels increasingly abandoned by its former ideological ally.

The weakening in relations between the two states is indicated in trade figures. At the beginning of October 2017, Beijing stated that it would seriously implement UN sanctions against North Korea in response to North Korea’s nuclear weapons tests. Ships carrying North Korean coal are now being turned away from Chinese ports, and the Chinese government has reported that oil and liquefied gas exports to North Korea have decreased dramatically. North Korean laborers and restaurant workers in China have also been ordered to leave the country and gas prices are way up in Pyongyang.

While some are skeptical of these reports given China’s historically loose enforcement of multilateral sanctions against North Korea, the effects on North Korea indicate that the enforcement is real. If this is the case, it will be difficult for China to maintain the sanctions and simultaneously get in Pyongyang’s good graces.

As for South Korea and China, the leaders met on the side of the 10–11 November 2017 APEC Summit in Da Nang, Vietnam. The strength — or otherwise — of this bilateral relationship can be indicated by South Korea’s military action and level of cooperation with the United States. In these dimensions, no significant changes have been announced.

Seoul and Beijing’s November normalization in relations came about without any amendments to THAAD, which was the root cause of the bilateral tensions. China remains firmly against it, and the South Korean government has delayed its installment — though it cannot get rid of it completely as it is US property.

Despite South Korean President Moon Jae-in’s desire to approach North Korea diplomatically, he has been no dove in the face of North Korea’s threats. In early October, Moon said that while South Korea will not host nuclear weapons itself, it would also ‘never tolerate’ North Korea as a nuclear state. South Korea’s military has met with its US and Japanese counterparts and conducted joint drills — including bombing drills near the demilitarized zone.

Part of the deal for the reset in relations for China and South Korea were the ‘three nos’: no more THAAD deployment, no more missile defense systems in South Korea and no defence alliance with Japan and the United States.

But the deal still works in South Korea’s favor because it did not have to give up anything of strategic value. THAAD is already deployed and is under the US Army’s control, Seoul continues to react sternly to North Korean provocations, and a formal alliance between South Korea and Japan was never likely in the first place since the United States guarantees security to both these countries.

But what about the US factor? Now that President Trump’s five-country tour is finished, China’s relationship with the two Koreas can be seen through a new lens. During his visits to South Korea and China, Trump kept the target of his speeches firmly on North Korea, avoiding confrontational language with his hosts, both of whom he has criticized in the past for their action or inaction towards North Korea.

During the state visit, China announced that it would likely continue to exert pressure on North Korea in terms of oil and possibly finance. While this may be an extension of its ‘good hosting’ of Trump, China has indicated that it is serious about avoiding direct economic confrontation with the United States, as well as courting South Korea. Recent reports that China has temporarily halted its tourism to North Korea also support this view.

A Chinese delegation visited North Korea last week for a four-day goodwill visit, but was reportedly snubbed by Kim Jong-un. In late November, the foreign ministries of Beijing and Seoul announced a summit between presidents Moon and Xi to take place during a state visit in Beijing in December. It seems that Beijing is walking the metaphorical 38th parallel tightrope. But the further China steps, the more difficult this balancing act will become. While the peninsula is calmer now than it has been in the past few months it is never static and eventually something will have to give. If North Korea snaps Beijing’s olive branch with another nuclear test this will only push Seoul closer to the center of the US security orbit. The coming months will reveal whether Beijing’s actions are just empty words.

Nate Kerkhoff is a student at the Yonsei University Graduate School of International Studies.