China's Nuclear Weapons: Everything You Always Wanted to Know 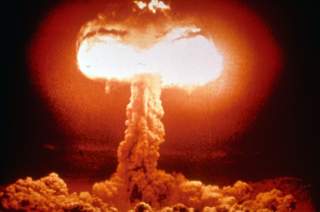 With its first nuclear test on October 16, 1964, China joined the other victorious allies of World War II in the nuclear club, both cementing and unsettling the postwar order. Hard experience of the American nuclear threat during the Korean War and the divorce from the Soviet Union, propelled China towards the bomb in ways familiar to those observing North Korea's current quest. Mao Zedong himself said in 1956, "…if we don't want to be bullied, we have to have this thing."

But China for all its size has made itself a limited nuclear power. It has demonstrated its ability to build very big bombs but chose to test and make few of them. The size of China's arsenal is a highly guarded state secret, but estimates put it in the several hundreds, not thousands. Beijing can hold armies and cities at risk, but not make the rubble bounce several times over.

During the palmy days of the 1950s, the Union of Soviet Socialist Republics shared technical, industrial and military knowledge and material with its new communist sibling. However, by the early 1960s the relationship was on the rocks, inflamed in part by Soviet alarm at Mao's erratic behavior and Chinese irritation over the USSR's support of India. Without Moscow's promised bomb prototype and fissionable material the Chinese had to do it themselves.

The first Chinese nuclear device, code-named "596" for "June 1959" when it began, was like the Soviet Union's and Britain's first bombs, in that it was a close copy of the "Fat Man" implosion bomb dropped on Nagasaki. Its yield - 22 kilotons - also closely matched the others but its fuel was pure Uranium-235 rather than plutonium. The CIA knew of China's upcoming test from its new Corona spy satellites and the State Department sought to reduce the impact of the test by announcing it in advance.

Nonetheless the advent of China as the world's fifth nuclear power caused an uproar. Taiwan wanted U.S. backing for either a preemptive strike or its own nukes. (Neither came.) U.S. analysts had missed China's U-235 production and wondered what else they'd missed. Diplomats began exploring non-proliferation talks with the Soviets. But doubts still floated about China's nuclear status. Sure, they now had the bomb, but could they fight with it?

Mao was determined to prove it. On May 14, 1965, less than six months after the first test a PLAAF H-6 bomber dropped a fully-weaponized version of the 596 at the Lop Nur Test Site in Xinjiang. The third test a year later in 1966 tested the first "boosted" design fortified with Lithium-6 fusion fuel. It yielded an impressive 250 kilotons. But China still got the "Rodney Dangerfield" treatment from foreign defense thinkers.

So on October 27, 1966 a DF-2 intermediate-range ballistic missile flew 550 miles over populated parts of China to Lop Nur where its 12-kiloton warhead detonated 180 feet over the Gobi Desert. It was the second all-up nuclear missile test ever conducted after the U.S. Frigate Bird test of 1962, and it quieted doubts about China's nukes.

Even as the Cultural Revolution began roiling China the nuclear tests continued; a month after the missile test a 300-kiloton boosted-fission explosion showcased their design of a hydrogen bomb. Six months later on June 17, 1967, only two and a half years after its first nuclear test, China tested an air-deliverable thermonuclear weapon.

The three-stage device used a fission primary (an A-bomb) to heat and compress a second stage of lithium-6 deuteride powder. A third stage was a heavy shell of uranium-238, which held the explosion together for just long enough for the hydrogen in the lithium compound to undergo nuclear fusion. The resulting burst of neutrons caused the U-238 shell to fission and explode.

The bomb yielded 3.3 megatons - big by any measure, big enough to destroy Tokyo or Los Angeles or Moscow. China ran the race to the H-bomb faster than any nation before or since that we know of.

In 1967, China’s attempt at using plutonium in a bomb fizzled, but it was successful in another test in December of 1968. This 3.0 megaton shot, and others with yields of 3-3.4 megatons, were also tested in 1969, 1972 and 1973. In addition, all of these tests were for fitting a large warhead on the DF-3 ICBM. They represent all but the largest Chinese tests. After all of this work, China conducted its biggest test, a 4.0 megaton blast, in November 1976. That test proved the capability of the DF-5 ICBM's warhead.

One H-bomb test nearly went horribly wrong. When test pilot Yang Guoxiang lined up his Q-5A fighter-bomber for its drop maneuver and pulled the weapon release, the bomb failed to drop. After three attempts Yang returned to base with a live hydrogen bomb slung beneath his plane. The whole airbase - all 10,000 crew - sheltered in underground tunnels while a lonely Yang carefully climbed out of his cockpit and awaited assistance. All ended well this time and Yang later successfully carried out his mission.

China's last big blast, a one-megaton warhead test in October 1980, ended the era of atmospheric testing. No nuclear-weapons state has tested above ground since. But nuclear testing never ends, really, not when they were conducted not far from populated areas. As with natives to the Pacific atolls and Russian steppes, the Gobi Desert and its peoples will bear the long-term impact of radiation from those nuclear tests for a long time.